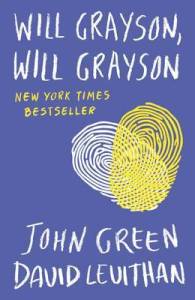 Will Grayson and Will Grayson, by John Green and that other guy, you have both failed to impress me. I had such high expectations for this book, after reading all of John Green’s other published works and having sampled David Levithan’s writing when I read ‘Dash and Lily’s Book of Dares’. Perhaps, because of these high expectations, I was guaranteed to be let down.

Being a co-written book, ‘Will Grayson, Will Grayson’ is a mixture of good and bad. Unlike other co-written books, such as ‘Beautiful Creatures’, it is easy to tell which writer is writing which Will Grayson. I preferred the first Will, who had a fairly robotic way of life until his joints were oiled by love. The way that this Will Grayson articulated his feelings was occasionally beautiful but generally easy to relate to. It was easier to love this Will Grayson, compared to the second one.
The second Will Grayson was distinguished by his inability to use capital letters. He was suffering from depression and knew that he shouldn’t use his mental condition as an excuse for being a rude and horrible person, but did it anyway. The way he treated his friends and his mother made me want to distance myself from his character, or completely skip his chapters all together. One Will Grayson was definitely enough for me.
The second Will Grayson was gay. This book did a lot to raise the awareness of homosexuality; the plot is all about a musical production about being gay. But, I didn’t understand why it was so necessary to make a big deal over who was gay and who wasn’t. Isn’t the point of raising awareness about homosexuality to promote that everyone is normal, no matter what? Why did the fact that a character may or may not be gay have to constantly be mentioned?
Also, one of the main aspects of the book was that the Will Graysons were both meant to meet. This meeting didn’t happen until 100 pages in, yet the I felt the plot in first 100 pages could have been at least halved. Not a lot was happening up until the point they met, and to be honest, not a lot happened after that either. I’d say, out of the whole 308 pages, both Will Graysons were together for 20 pages, max. Not what I expected.
The ending was abrupt and unsatisfying, but at least one Will Grayson got a happy ending.
Of course, if you’re looking for a book that has a trial and error (or trial-error-trial) attempt at being witty and somewhat insightful then this is the book for you. If you’re dead set on reading this book just because John Green co-wrote it, may I recommend ‘Paper Towns’ instead? The library also has a copy of this and you won’t regret the decision of deciding to follow the story of Quentin and Margo over Will Grayson and the other Will Grayson.