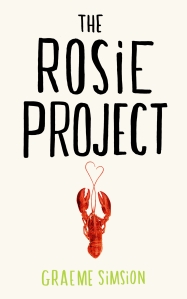 I know what you’re all thinking about the cover. Lobster? Not that relevant.

‘The Rosie Project’ by Graeme Simsion can best be described as John Green for adults. Although marketed on NetGalley as a young adult book, after reading I feel that new adult would be a better category. This book would definitely fit alongside ‘Landline’ by Rainbow Rowell on your bookshelves.

So, we follow the perspective of Don, a geneticist who’s socially inept. It’s never explicitly mentioned, but I assumed he had a mild case of autism which, in his job, worked to his advantage. His main aim is to gain a wife as he believes he is incompatible within a relationship and can count the number of friends he has on one hand.

Of course, with his methodical brain, he develops a questionnaire to find the perfect partner. But, if romantic comedies have taught me anything, it’s that what you want isn’t necessarily what you get. Enter Rosie, your factory setting manic pixie dream girl. She allows Don to change himself and improve his reactions to society. Rosie pushes him out of his comfort zone and strict schedule in order to show him what he’s missing out on.

Your typical Alaska girl, complete with desired figure and a bad smoking habit.

Despite the formulaeic character of Rosie, Don was a breath of fresh air as a protagonist. He wasn’t afraid to question why people do things and the morals of their actions. He was intelligent and an accomplished person in many extra-curricular activies. If it wasn’t for his inability to feel comfortable in social situations, he would have been the most popular guy around.

In order to gain the affections of Rosie, he helps her to discover the identity of her real father. This created the bulk of the plot. At first, I thought I’d guessed it straight away but when the truth came out, I never saw it coming. The Father Project was meticulous but not ridiculous. and I found myself more than pleased with the result (though I did question Rosie for finding a problem with everything.)

Just like ‘Landline’, I wasn’t expecting a mature book. I should have been more clued in, seeing as the characters are thirty-nine and twenty-nine (talk about an age difference!) so I couldn’t  complexly understand the situations they were in. Yet, this did not hinder my enjoyment of the novel.

I don’t want to spoil anything, but one of my main complaints with the book was its rapid last chapter. It was like ending a book with ‘and they lived happily ever after’ without actually describing any events that led to their eventual happiness.

Overall, I would give ‘The Rosie Project’ 3.5 stars, just because I didn’t completely fall in love with the book, and Rosie was quite generic as love interests go. That said, I did laugh out loud quite a few times, which will always bolster the star rating of a novel.

One thought on “Review: The Rosie Project by Graeme Simsion”