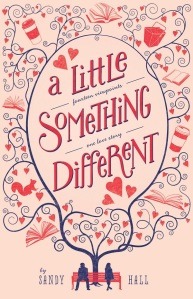 What’s not to love about this book? I completely adored it and am going to spend the next four hundred words fawning over it.

The premise of the novel is that it’s a love story, between Lea and Gabe, told from basically everyone’s perspective expect Lea and Gabe’s. This includes a squirrel and a bench. A BENCH. An inanimate object has a part to play in Gabe and Lea’s love story. Genius.

Although there are fourteen different perspectives, all of them completely work and all of them I loved, which is odd because I normally have a favourite when it comes to multiple points of view. If I had to pick one, it would probably be Victor, a student in Lea and Gabe’s creative writing class that wishes the two of them would get together already so he wouldn’t have to deal with the sappy looks they give each other. Lea and Gabe are both his NO-TP and his OTP, I think.

I think it’s such a beautiful idea that people in all different kinds of situations can be invested in two people and want them to get together. It makes me think if teachers really do ‘ship’ their students together, or whether waitresses do create their own couples from their customers.

Of course, this really was the worst book if you get annoyed when characters can’t make the moves on each other. I did find myself, at points, being like ‘Gabe, just say you like her!’, ‘Lea, just kiss him!’. But this wasn’t a game of Sims. I couldn’t control their actions and for that I am glad, because otherwise the book would have been very short and Lea and Gabe would have got married.

They really were perfect for each other. I have nothing bad to say about them because it was literally the most ‘aw’dorable book I’ve ever read. Ingenious, humorous, real. Brilliant, beautiful and original. Higher praise could not be given.

My dream is to buy hundreds of copies of this book and then throw them into the streets for people to read and feel happy as a result. Right now, I smiling as I write this review, just thinking about what happened in the book and how darn cute it all was.

My only problem with it, and this isn’t really a problem, is that it could have been looooonger. I would have definitely appreciated another fifty pages discussing Gabe and Lea’s relationship since they got together, but I guess that’s what fan fiction is for.

Overall, I’d give this book 5 out of 5 stars, because it just impressed me so darn much. I’d recommend it to fans of Rainbow Roweel and Morgan Matson – this is exactly the time of book that would fit in between ‘Fangirl’ and ‘Amy and Roger’s Epic Retour’.

2 thoughts on “Review: A Little Something Different by Sally Hall”