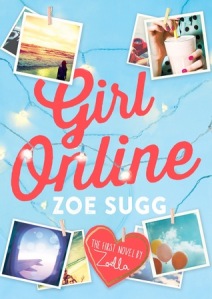 ‘Girl Online’ and the ghost writing scandal surrounding ‘Zoella’ has been one of the biggest things buzzing around the internet over the last couple of days. I’m not going to write about the ghostwriting in this review, simply the story and what I thought of the delivery, even though the fact Zoe Sugg didn’t write the book ‘entirely by herself’ is an important factor to how I received it.

Instead of giving my rating at the end of the review, I feel the need to preface my opinions. I only gave ‘Girl Online’ 1 star. There have been a lot of mixed reviews about this one, from one star to five stars, but there aren’t very many reasons why these ratings were given. Here are mine.

Firstly, the plot was not what I was expecting. Sugg seems to have followed the idea of ‘write what you know’, creating a fictional persona, rather than a character because of the vast similarities between herself and Penny. However, seeing as Sugg has over 6 million subscribers, I was surprised that this part of her life wasn’t utilised in the novel. It’s called ‘Girl Online’ because it’s meant to be about a girl who blogs anonymously online, but this only acted as a mere subplot. I was expecting Penny’s status as a blogger to play a much bigger role in the storyline, rather than to just be something quirky she did. Also, the panic attacks element to Penny’s character was not explained well, which left me feeling very confused whenever they occurred.

Secondly, the romance was ridiculous. Noah, her love interest, is introduced on the first day Penny is in New York and within about six hours, they’ve fallen in love. They’re sharing secrets they’ve never told anyone else, they’re sharing family traditions with each other, though they’re practically strangers. Noah was 18 and Penny was only 15, yet her parents were more than happy for her to run about a foreign city with a guy she just met. Hmm.

Along with the insta-love romance, everything just seemed a bit too convenient. Of course this rich American couple are going to pay for her family to have Christmas in New York to plan a wedding. Of course Penny’s allowed to bring her best friend with her. It’s so realistic that the Porter family got to stay in the states for another week, so Penny could spend more time with Noah(!).

This book was definitely split into distinct parts. The first part, which lasted for about 30% of the novel, was the most banal reading experience ever. Penny told, and didn’t show, the reader about her life, family and friends. Some horrific video was posted of her stumbling on stage onto the Internet, so she jetted off to New York to escape it all. New York took up the next 50%, which was probably the best bit, which isn’t saying much. Although the romance was so instant and made me roll my eyes too many times, it was still sweet. It had a ‘Just One Day’ feel to it. As soon as Penny returned home from NYC, the last 20% of the novel was devoted to revealing the promised ‘big secret’ of the blurb that Noah was hiding. This was interesting, as I’m sure Sugg has experienced online hate, so you could tell Penny’s feelings about it were genuine.

I did find it incredibly ironic that once the ghostwriting thing was revealed to the world, Sugg did exactly what Penny did and hid from the online world. Although, it seems Penny had more guts than she did, and overtly, with no shame, told the world her side of the story.

As I said, this book received 1 star. The inserted blog posts from ‘Girl Online’ were mediocre, the plot was average and predictable. What I thought would be delivered was not. This was generally a ‘young adult’ novel that only stood out because of the author, not because of the content (and even then, she didn’t write it all herself.) For me, this novel faded into the background and was a disappointing read.

Leave a Reply to Eleanor May Cancel reply