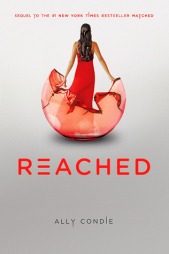 ‘Reached’ is the third and final book in the ‘Matched’ trilogy. The first two books felt like they were building up to this finale, and all the questions were going to be answered. Well, ‘Reached’ followed through on the answers thing, but it was safe to say this book was less than spectacular.

It’s 512 pages. That’s a lot of time in which to conclude a trilogy. I wish ‘Mockingjay’ had been 512 pages. But, that’s also a lot of time for me to invest in finishing the series and my overall opinion was that it could have been wrapped up in about 200 pages max.

Two things happened in this book: a plague was discovered that was being used to wipe out the ‘enemy’ (who were the enemy? We never find out.) but the plague had been caught by just about everyone that wasn’t the enemy, and democracy was founded. There were three different perspectives in ‘Reached’, one from Cassia, Xander and Ky. I thought Ky’s was the most irrelevant (mostly because he caught the plague, so didn’t have much to contribute) and Xander’s was too bogged down in immunisation jargon. (My Biology qualification strikes again!)

I felt that the plague plot was extremely drawn out. I actually used the word ‘bored’ to describe how I felt when slogging past page 300. I was hoping they’d find a cure so the book would end already. But the cure was like finding out Tris was divergent because she was ‘genetically pure’. Science seems to always be the answer. And plants. It was all so botanical.

Too much time was spent deliberating over who the ‘Pilot’ was, when I still don’t know if he actually existed. He was like a messiah – everyone was waiting for him to show up.

However, the sheer quantity of pages it took to do so, was ridiculous. Therefore, I give this book 2 stars. ‘Matched’ is still my favourite of the series. I did love the use of poetry and how even that all came together at the end, but I was disappointing with this finale, which plateaued quickly after ‘Matched’ ended. I would recommend reading ‘Matched’, but not getting invested in the rest of the series. If you’re that interested, just search for a plot synopsis. At least it didn’t turn into a ‘girl versus government’ novel. But more or that later.