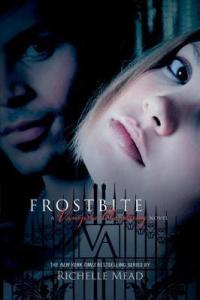 The sequel to Vampire Academy was also going to struggle to meet my five star rating. ‘Frostbite’ near enough accomplished this goal. If possible, there was even more action and adventure in this book than there was in ‘Blood Sisters’ (although signficantly less exposure of Rose and Lissa’s friendship.)

I’d liked to compare ‘Frostbite’ to ‘Harry Potter and the Chamber of Secrets’. These books are both sequels. They follow the debut, where the protagonist battles their first foe. Innocence is jeopardised, but they all manage to survive another year at their academy. ‘The Chamber of Secrets’ is my favourite Harry Potter book because you know that things are about to get serious. The threat of Voldemort is weakened, but still present, allowing the characters to enjoy their school life without as many anxiety attacks. I got the same feeling with this book.

Some students of Vladimir’s Academy get to go on a ski trip. All is fun and good. Rose is a little put out that she can’t be with Dimitri, but she settles with Mason, who is a great friend and companion for Rose to have at the time. Rose and Lissa get to live in a luxury chalet, attend a few vampire court meetings and enjoy the relaxing nature of hot tubs.

I think Adrian is a significant factor for why people love this book so much. He’s smooth, charming and is surrounded by an aura of irrestibility, as well as a cloud of clove smoke. But for me, he was no Dimitri. As soon as he started talking to Rose, I wanted him to back off. It took me a while to warm to this new character, but it helped that he was helping Lissa with her Spirit power.

Just when you think you’re in for another one hundred pages of vampires and dhampirs snuggling in front of a fire…STRIGOI ATTACK. My heart started racing as soon as a strigoi was mentioned. What went down between Mason, Mia, Rose and Eddie and the trio of evil vampires. So not to spoil anything, all I’ll say is I’ve never read anything so bad-ass. Rose was on fire (not literally, though I’m sure Christian could make that happen.)

Overall, I think this was the perfect sequel to ‘Vampire Academy’ and I give it 4 stars. The plot is progressing well, Rose and Lissa are both becoming more powerful, despite their romantic endevours wavering slightly (poor, jealous Christian.) I can’t wait to review the third book in the series.