There’s nothing better than reading a book where the protagonist is surrounded by a great group of friends – friends that support them in whatever they do but also challenge them to do things they wouldn’t be able to do alone. Here are our top five picks for friendship groups we’d love to be a part of! 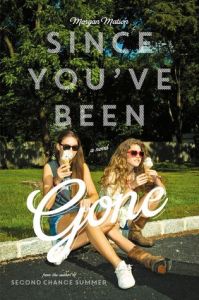 1. Emily, Frank, Dawn and Collins from ‘Since You’ve Been Gone’
What was brilliant about this friendship was that it only really culminated over the summer. As readers, we got to experience Emily discovering new friends, whilst still surviving Sloane’s absence. This book is the perfect example of friendship – if everyone is willing to skinny-dip, then you know you’re friends for life!

2. Cammie, Bex, Liz and Macy from ‘The Gallagher Girls’
All four friends bring something distinctly different to this group; Bex has her beauty, Liz has her brains and Macy has her daring personality (not to mention her father’s money!) Again, if someone is willing to bug the house of the guy you like, there’s nothing they wouldn’t do for you!

3. Harry, Ron and Hermione from ‘Harry Potter’
There’s no way this golden trio couldn’t be mentioned! I loved watching their friendship grow as the series progressed and how supportive Ron and Hermione were of Harry, even when he was being a little bit of a douche-canoe. They’re consistent dedication to helping each other, and the rest of the magical universe for that matter, should be admired.

4. Percy, Annabeth, Jason, Piper, Leo, Frank and Hazel from ‘Heroes of Olympus’
Why I loved ‘Mark of Athena’ the most out of the whole series was the friendship and teamwork that arose from the seven halfbloods living in the Argo II. Each character could easily mix with any of the other six. Although, if I was to join this group, I might end up feeling like the ninth wheel (as Leo is already spoken for.) Rick really seems to care about his characters finding love. Aww!

5. Cinder, Iko, Scarlett, Wolf, Cress and Thorne from ‘The Lunar Chronicles’
Again, a similar problem would arise from being part of this friendship group – everyone’s part of a couple! (Don’t tell me Cress and Thorne aren’t a proper thing yet. Just wait for ‘Winter’ and I know they WILL be!) What’s special about this group is the diversity, in both gender, age and ability…..and the degree to which they can be classified as human, of course. Cress is a cutie, Scarlett is kick-ass and I bet Thorne would be able to keep everyone entertained, even if the world is being crippled by disease.

One thought on “T5W: Friendship Groups”