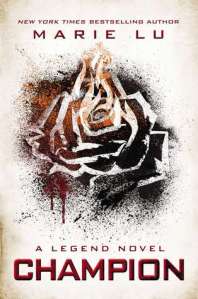 I have started and completed this series in the space of four days, and now that it’s over I can feel the post-series depression settling in. Legend was my first 5 star review of the year, and now when anybody asks me what my favourite books are this series will definitely be in the roll-call. Champion was a bittersweet ending to this incredible series. It was fast paced and the plot was just as intricately woven as it’s predecessors. Marie Lu really had written something special.

Day and June have gone through a lot, and unfortunately this led to communication breakdown. EIGHT MONTHS. There is an eight month gap in-between Prodigy and Champion and within those eight months Day hasn’t spoken to June after the shocking news that puts him out of action for the first half-ish of the book.

Their relationship is so fragile, but still so heart-warming. What I loved about this series is that it’s sort of understated. Day and June do have an intimate scene in this finale, but it’s obvious that the main focus of their bond will always be that they understand each other’s strong family values. Day put Eden first and that’s realistic.

I felt that Champion was slightly repetitious in terms of content. There were a lot of parallels with Legend, but maybe that was the intention! Day and June are still excellent when it comes to tricking other people and getting out of certain situations. Their rational thinking really is a blessing.

I feel this series, unlike others of its kind, isn’t when you’re reading about a dystopian world’s impact on people, but rather people’s impact on a dystopian world. Champion was a really well executed finale – it kept all of the things I loved about the series strong until the very end. I’m so looking forward to reading whatever else Marie Lu writes.

I think that the ending was the perfect mix of ambiguity, but knowing it’s going to be okay. This one was a roller-coaster of emotions and I don’t think I’ve ever cried more at an epilogue. No doubt without the epilogue I would have given this book a lower rating, but I think it really saved the openness. Day and June went on some incredible journeys and their character development was excellent! By the end you feel like they’re real people and that this could actually happen in America in 50 or so years.

Overall I’d give this series a million stars if I could. I’m giving Champion 4 stars because it did the series justice as an ending, but I think there could have been more going on, as it felt quite coincidental and resolute in places. It’s going to be hard to beat this series now.