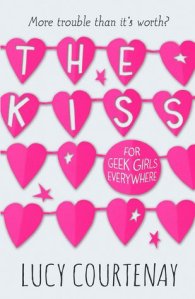 From the title and the cover, I was totally expecting to read a slushy contemporary about first love or something like that, and at the time, I definitely felt in the mood for that kind of book. But, I’m sad to say I can only give this book 1 star, for a multitude of reasons.

1.) The Plot
The book begins with Delilah getting the kiss of her life from some French guy, that’s linked to the mythology of Aphrodite’s Kiss. That seems like plot enough for a contemporary romance. However, I found there were too many strands to this story to come out with anything substantial. First, there was the plan to get Delilah’s BFF Tabitha back with her boyfriend, which only led to mischief, an amateur production of “What an Ado!”, a musical version of my favourite Shakespeare play, some weird credit-card-drugs-bust, zombies (?) and a visit from a French pen pal. There was just too much going on, that made the book seem like it didn’t have a focus…especially when the Aphrodite’s Kiss thing didn’t come to anything.

2.) The Unrealistic Characters
So, the main character is 16, but she’s acting like she’s in her third year at university. She gets a job in a bar (I mean, what the heck, she’s underage, that’s not even legal!) and stays up till all hours, running around the town. There’s no way that a girl of only 16 would be allowed to do half the things Delilah gets away with. Plus, it kind of felt like the author was advocating underage drinking, which made me feel uncomfortable. I can only suspend my disbelief to a certain extent, and this book pushed the limits.

3.) The Mockery of Much Ado About Nothing
I had to deduct a star solely for the incredibly negative things Delilah and co were saying about the characters of the play/musical. Hero is not ‘wet’ (what does that even mean?) if you read the original text. She’s vulnerable, but in the end, does what’s best for her, not Claudio. Geez. Can’t a 21st century character defend the greatness of classic literature for once?

4.) The Romance
It was just lusty, so cringe-y and unpleasant to read. Need I say more?

5.) The Wobbly Morals
Delilah knowingly spikes Tabitha’s ex-boyfriend’s drink four times AND IS NOT REPRIMANDED BY THE BAR OWNER. This is not acceptable behaviour, and just downright malicious, I don’t care if he broke your friend’s heart, the guy did not deserve to have his drink spiked. The whole event was just so blasé, it made me want to stop reading immediately.

I guess that’s five reasons, which are good enough to deduct a star each. But that would mean the book would have no stars, so the star I left was just for…um…contributing to my Goodreads challenge? If you want to read a book about a kiss, read ‘Anna and the French Kiss’ instead.

P.S. Why is the tag line ‘For Geek Girls Everywhere’? As a geek girl, I did not enjoy this at all. How was it geeky? Harriet Manners would probably disapprove.