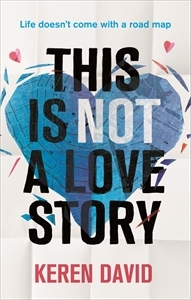 This Is Not A Love Story by Keren David
Genre: Contemporary, Romance
Published by: Atom
Pages: 352
Format: E-Book
Rating: ★★★
Where to Find: Goodreads | Amazon

The start of this books is very reminiscent of a John Green novel. It’s got three classic plot points: missing girl, Amsterdam, and general confusion on everyone else’s part. The English school in a foreign country was also along the lines of Anna and the French Kiss. With these comparisons in mind I was expecting to really enjoy This Is Not A Love Story, but in actuality I am very confused by this book. It has a lot of good stuff like the complicated nature of imagining someone like they’re not realistic, and mystery and a strong female character. Plus, because both characters were Jewish there was a lot of Jewish culture that made this story really enriching. However, there were also some confusing morals like ‘I’ll just date you so that you can get over your ex’ which had me feeling slightly uncomfortable.

The characters are all dealing with their own issues. Kitty was an Instagram and Youtube creator who wanted to document her adventures in Amsterdam, and on the surface she seemed lighthearted and fun she was dealing with a heart issue that meant significant conflict. There was just something compelling about Kitty’s innocent. Also, she was really forgiving and strove to fix the relationships of not only herself but the other characters and I just found her to be really endearing.

I definitely preferred Kitty’s chapters to Theo’s. I did really sympathise with Theo, though. He was sort of ostracised by his family, which partly explained his distanced demeanour. Ethan was probably my least favourite character, because I found his perpetually moody attitude to be slightly unbelievable.

As a group there communication was shocking. Even though they spent a lot of time together I didn’t feel they really knew each other, even by the end of the novel.

There was a real mixed bag for romances in this story. There’s Kitty, who’s never been in love before and doesn’t have any experience with relationships; Theo, who was involved in a scandalous affair with his teacher; and Ethan, who’s been in a lot of relationships and is openly bisexual. (Yes, the word bisexual was actually used! Three cheers for some varied LGBTQA representation!)

I am not entirely convinced that this wasn’t a love story. The two protagonists had this thing about not falling in love in a foreign country just so the sake of it because it sounds romantic, and yet that was exactly what happened! I couldn’t help but roll my eyes at Kitty whenever she made reference to the title because it seemed so contrived. A more realistic title would be ‘Love Triangle in Amsterdam and One Big Misunderstanding.’

HOWEVER, I was pleasantly surprised by the ending of this love triangle, I can assure you that I wasn’t really expecting it! All of the characters come to some pretty clear conclusions about themselves and, although it felt rather abrupt, the ending was perfectly justified by all of the confusion floating around between the teens.

Kitty really wants to change her image when she’s in Amsterdam and it was very surreal to read Kitty and Theo’s POVs with neither of them really understanding the other. Theo was under the impression that Kitty was worldly wise, a beautiful and tall manic pixie dream girl who could definitely make him forget about Sophie (the teacher). Kitty was absolutely convinced that Theo was the hero in some great Romantic love story, when really he was the obsessed 16 year old boy who needed to face the real world. I think this is where the two POVs really paid off because their ideas of each other were so juxtaposed by reality. This device was something I also really liked in Dash and Lily’s Book of Dares.

The actual structure of the novel, on the other hand, was frustrating. Extremely clever, but frustrating. Karen David was able to fabricate this almost unbearable tension and mystery surrounding ‘where the heck did Kitty go?’ that really pushed me to get through the backstory that led us to the present. What actually happened  to Kitty was comparatively underwhelming, but the fact that all this drama was created through the structure was impressive.

Although the love story, in my opinion, was the most prominent, this book also dealt with a lot of family issues, too. With the three different characters really allowing the authors to showcase three different family dynamics, so if you want to read more of that in YA, then I would definitely recommend this book.

Overall, I gave This Is Not A Love Story 3 stars. It’s a great mix of a heavy and light hearted contemporary, and I’ve been thinking about the ending for such a long time!