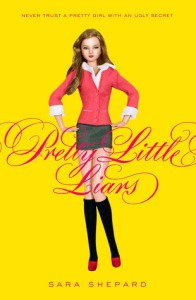 Pretty Little Liars by Sara Shepard
Genre: Mystery, Contemporary
Published by: Harper Collins
Pages: 286
Format: E-Book
Rating: ★★★
Where to Find: Goodreads | Author | Amazon
I really wanted to dive into a new series. If I’d have known PLL was about 16 books long, then maybe I’d have reconsidered my decision. Knowing nothing about the TV show and therefore the plot, I was pleasantly surprised by my reaction to ‘Pretty Little Liars’ and it’s ability to draw you in  and wrap you up in the lies, just as much as the characters.

Plot
Every girl has a secret that they shared with Ali. Ali goes missing, believed dead. Every girl thinks their secret is safe. Anonymous texts are delivered years later, that suggest Ali is quite as dead as everyone believed, *dramatic music swells* and secrets are about to become common knowledge.

It’s a fairly basic outline. There are four girls, Aria, Spencer, Emily and Hannah. The same thing happens to each of them, or variations of the same thing depending on the secret. I thought I’d be bored by the repetitive nature of the text-reveal, but instead I was addicted. I don’t know how it happened. One minute, I was reading Chapter One and the next minute, I was reading the Acknowledgments.

I appreciated the fast pace of the story, and how you were always in the thick of the drama. Not a sentence seemed unnecessary.

Characters
None of the girls are likeable. They’re all slightly immoral in some way, apart from Emily, whose secret is more to do with her identity rather than a naughty habit or action. Because the reader is slowly made aware of the girls’ secrets, how the girls are eventually shamed and outed is slightly predictable.

The girls aren’t friends anymore. They’d grown apart since Ali. I look forward to them developing more of a friendship, or a mutual acceptance of one another, after the end of the book, when everything just came crashing down.

I don’t know how they’re going to be redeemed. Spencer, the studious, had the most relatable qualities for me, then Emily, but Aria and Hannah were characters I couldn’t connect with. I didn’t understand their decisions when they knew the repercussions. Fingers crossed there’s character growth in the next book.

Conclusion
Overall, I’m going to give ‘Pretty Little Liars’ 3 stars. It feels like a guilty pleasure read, because some of the things the girls did I thought were completely wrong, but somehow I couldn’t stop reading. It was a enticing and intriguing debut, that had me grabbing for the second book. I’d definitely recommend to anyone who can put up with the kind of bitchy, material girls and look past them for a good story.

One thought on “Review: Pretty Little Liars by Sara Shepard”