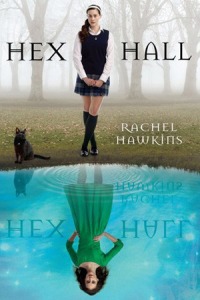 You would not believe the amount of time that this book has just been sat on my TBR gathering dust. The cover that I own is not great, so I can’t say I was particularly looking forward to reading it to begin with. Then I read Rebel Belle, which was super fun, so I thought, why not give Hex Hall a try?

Overall, it’s very similar to CC Hunter’s Shadow Falls series in the sense that a bunch of different supernaturals go to the same school. Hex Hall, however has a little mystery thrown in for good measure. witches are being killed and the only vampire in the school, who just so happens to be our main character’s best friend is the only suspect. Dun dun DUN!

The beginning of the story was really gripping, and to begin with I though I was in for something special. Unfortunately, as soon as Sophie got to the magical school – which is normally my favourite part of these kind of stories – things started to go down hill. There was everything you’d expect to be there: roommate drama, a school dance, training montages, cafeteria scenes.

I wasn’t bad, it just wasn’t good either. None of the characters were particularly stand-out. The trio of bitchy witches were manipulative and mischievous and pretty much fit in with all the other boarding school queen bee stereotypes. The love interest (guess who he’s already dating(!)) was your classic bad boy. He’s got a little bit of a dark side, but apparently is too irresistible not to try and steal. As you can imagine communication was completely lacking in their relationship, and things could have been a lot simpler had they just said exactly what they meant and didn’t string one another along so much.

The final reveal was easy to guess, but sets up the conflict for the rest of the trilogy. If you’ve read the sequel, do you think I should continue? I would give Hex Hall 2.5 stars if you’re interested in reading her writing, then I suggest you skip straight ahead to Rebel Belle, which, if anything, just shows how much Rachel Hawkins had improves as a writer!