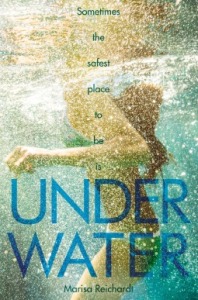 Synopsis
Morgan, a seventeen year old star swimmer, suffers from agoraphobia after her experience of a school shooting. Tired of being a hermit, Morgan wishes she could live a normal life. Luckily, a new neighbour, Evan, gives her a chance to do so, and with Evan’s reassurance and the support of her family, Morgan finds her way back underwater.

Plot
I really enjoyed the dual complexity and simplicity of this story. In essence, it’s about a girl overcoming her anxiety and becoming who she was and wants to be. It’s a really strong undercurrent throughout the entire book, but embellishing the story is a romance, family struggles and internal anxieties which only come to light later on. What you think is going to be a lovely contemporary read turns into something much more hard hitting than your everyday romance.

I think ‘Underwater’ is going to do incredibly well because of the comparisons I could draw to ‘Everything, Everything’ by Nicola Yoon, one of my favourite books of the year. Morgan is just as sweet and likeable as Maddy. As much as I wanted her to get better quickly, I loved that she worked through her issues at her own pace, and didn’t let exterior forces like her therapist or Evan push her.

Romance
Morgan can be a little stereotypical in thinking she’s not normal, and therefore pushes people away because she’s trying to make decisions for them. Although this can build a good romantic scene, where the lovers run at each other in slow motion across a parking lot, akin to Aria and Ezra in ‘Pretty Little Liars’, I just wanted to shake her shoulders. Evan wanted to know her, and she underestimated that.

I very much enjoyed Evan. He was really friendly and trusting – overall a great love interest. I love how the book started with Morgan and Evan meeting for the first time because I felt like I got to dive right in to the good stuff. Watching their relationship evolve into something open and equal was special.

Action
As I said, behind the scenes, there’s a lot going on. Morgan witnessed, and believes herself to be partly responsible for, a school shooting. This kind of mental torment and guilt led her to become agoraphobic. Some of my favourite parts of the novel were when Morgan was interacting with her therapist and slowly coming to terms with what had happened in the past. It felt real and I felt just as proud of Morgan as her family as she made steps towards the mentally healthy lifestyle.

I think I would have liked more scenes involving water. Not like I don’t love a good swimming pool kiss, but I needed more of them, especially because there was so much emphasis on Morgan as a swimmer and lover of the water.

Conclusion
I just love it. I gave the book 3.5 stars, because I did have a slight issue with the introduction of a love interest to spark the betterment of mental health, and I want to discuss that more in a video, because there are plenty of other books I can think of that employ this tactic. Overall, ‘Underwater’ is a masterpiece of a debut, light and heavy at the same time, if you’re looking for a book that goes below the surface, this is it!

(How many water puns could I include here?)