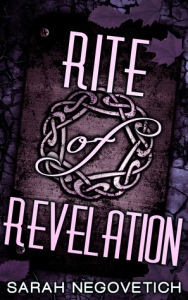 We were approached by Sarah to review the second book in her series, after reading Rite Of Rejection around this time last year. The first book in the series ends on a huge cliffhanger, and originally we didn’t think there was going to be a sequel, but there was more of Rebecca’s story to be told, so of course, we were delighted to be able to read the next instalment!

After escaping the PIT, Rebecca, Daniel and co. must find to survive in the outside world, seeking refuge in a village full of others who have rejected the Cardinal’s rules.

Rite of Revelation picks up exactly where Rite of Rejection left off. You’re launched straight into the action as the group try and find a safe place, without really knowing who they can trust.

It felt like Sarah Negovetich set up a lot of scenarios that had the potential for dramatic action and emotional intensity, but didn’t take full advantage of each moment. But, the pacing was fast, so you were always moving.

Apart from a few unsurprising deaths, the feeling was generally quaint. Although the threat of the Cardinal catching up with the escapees was looming, it didn’t come to fruition until the very end.

There are quite a few new introductions to go with the new settings. Ana, the mother figure, was the stand out, offering emotional support to the newcomers.

The community vibe is reminiscent of The Host, and as they were explaining their lifestyle, we were reminded of Amity from Divergent….and also Pandemonium, the second book in the Delirium series. Basically, this books has all the classic elements of a sequel, once characters have escaped past the fence.

There isn’t a lot of character development for the side characters, and a lot of the time, they’re driven by one emotion, for example, Eric was moved by guilt for his status as a PIT guard, and Patrice was just down right angry.

We felt that throughout the entire book, Rebecca was coming to terms with what we all ready knew about her from the first book. She was meant to be a leader of the revolution. The ending was quite cyclic, and although the sequel served in building the world, it didn’t head in the direction we were expecting.

Rebecca and Daniel are obviously devoted to one another, but there wasn’t as much tension as in the first book. We think this is usually the product of having only one love interest, rather than two. It was extremely refreshing to have a couple who were completely happy with one another and didn’t feel their emotions torn.

In the final book, we can only speculate that maybe a rift will form between the two, in light of the ending, which will hopefully bring some delicious tension to the table.

Overall, we give Rite of Revelation 3 stars. It was a fun sequel that has propelled Rebecca’s story in an interesting direction, and the ending of this book certainly holds a lot of promise for the finale.