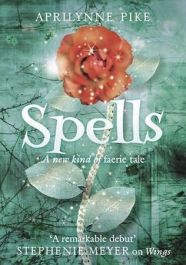 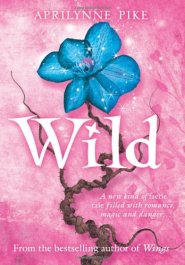 These beautiful, glittery pink books have been on Bee’s shelves for as long as I can remember. They were some of the first YA books she read, and mark the genesis of her love for faery fiction. This year, I made it my mission to read more of Bee’s books, and the Wings series is possibly my favourite thing so far.

P L O T
Laurel, our protagonist, discovers she’s a faery. It’s a big deal, because along with being a faery, are all the joys and threats that come with it, like: having a giant flower behind your shoulders, magic and troll attacks. As the series progresses, Laurel faces more and more peril as she comes into contact with the faery world of Avalon, and the dangers that lie within her home world.

Of course, Laurel is also a regular high-school girl. She’s got a sweet and caring boyfriend, David, and a lovely best friend, Chelsea. But discovering your a faery isn’t drama enough. She also has another love interest (cue the love triangle!) Taman, a faery guard who knew and loved her before she was sent to live in the human world. He’s fiery and passionate, and altogether more than David, no matter how cute he is.

R O M A N C E
I’d say love takes up the majority of these books. But don’t worry, only in the second books, Spells, when Laurel goes to a magic school in Avalon, does loving Tamani really become an option. She wholeheartedly loves David in Wings, but by Wild, doubt has started to creep in as Tamani returns to the human world with her, and enters the school system.

(*Spoiler WARNING*)
Because Bee had spoken at great length about this series when first reading it, I always knew who Laurel was going to end up with. She was destined to be with her star-crossed lover, of course, Tamani. Therefore, I grew to love Tam quite intensely. So much so, he’s on my list of fictional boyfriends, because he’s just so dreamy and perfect. David was all right, but I never got a sense that the love between himself and Laurel was equal. He obviously loved Laurel, but there was something about the way they interacted that made me think Laurel would have preferred to stay friends. I was extremely pleased with the ending and the closure it gave me over such a great love triangle relationship.
(*Spoilers COMPLETE*)

C H A R A C T E R S
I wanted to make another subheading for the characters outside of the love triangle. Namely, Chelsea. She was my favourite person in all four books. I felt I understood her the most, feeling second best to Laurel and harbouring unrequited feelings for David…she was in the trickiest situation. I felt like Tam’s speech to Chelsea about her worth was the best part of Destined. Tam loved Laurel, so it was difficult to praise another girl and he almost completely failed. In that sense, Chelsea is the most complex character because she doesn’t have a magical world or lover to fall back on.

Klea, who Laurel never knew whether to trust or not, was a very underwhelming villain. I trusted Laurel’s instinct and was totally not surprised by the arc of her story.

Katya, a faery friend in the world of Avalon, was like the parallel version of Chelsea. I wished she’d been given a bigger role in the series, because after Spells, she was kind of forgotten about. I put this down to the book focusing mostly on the romance element.

M A G I C
I felt I really got into the magical world of Avalon, and because it was a boarding school, I loved it all the more. However, I thought a lot more could have been done with this concept. It could be because the plot was very focused on the romance and escaping the trolls, which was fair enough, but I needed more in-depth knowledge about how Avalon worked. Learning about new societies is one of the best bits about reading fantasy or dystopian genres!

And while I thought Destined was an excellent finale, I thought Wild was a very drawn out plot. A new character, Yuki, is introduced and it’s up to the gang to discover if she’s a faery or not. It’s pretty obvious, really, so reading over 400 pages of back-and-forth, is she, isn’t she got very old. I also felt the readers were more aware of what was going on than the characters, which can work to a certain extent, but when it makes me want to skim-read, that’s when it’s taken too far.

Also, the threat of the trolls, while scary and alarming in Wings grew repetitive by the end of Destined. If you’d been to three school dances, and after everyone a troll attack occurred, would you really not expect it to happen? Not something to remove stars for, but it was certainly funny.

V E R D I C T
Was Wings an excellent debut? Yes. Was the series excellent overall? Yes. I would 100% recommend reading this series, if you love romance, faerie fiction, magic, adventure and mystery. Although the covers of this books suggest a more middle-grade series, they are definitely suitable for both middle-grade and YA audiences. I had an amazing time reading the four books and loved every single second! 5 out of 5 stars.