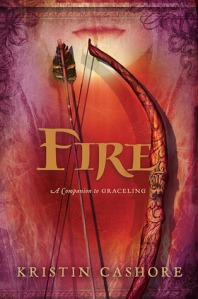 My advice to anyone wanting to read this series, would be to read it in chronological order, rather than publication order, because book two is not really book two. It’s a prequel. Why was this not mentioned anywhere on the Goodreads page?!  At least on the cover in this review it says “companion to Graceling,” but who reads the small print? It seriously took away from my enjoyment of the entire books, because I was constantly waiting for my favourites from the previous book to pop up. Fire begins with a prequel featuring this guy called Leck, he doesn’t appear again until the VERY END of the story and only then did I realise that Fire was a prequel. And all that time I was thinking, where’s Katsa and Bitterblue, are we seriously not going to even mention them? Oh! It’s because they’re not even born yet.

Let’s start with the positive this time! The different types of monster (like there are different types of Graces) was an absolutely excellent idea, and I so wish that this book that followed that idea more closely. The main character, Fire – yes that is her actual name, there are some seriously cool ones in this series – is half human and half monster, but she has very little action in the whole book. It’s obvious that she has extremely strong abilities, and because of her kind nature she always uses them for good. However, it might have been a bit more interesting to read about a character who doesn’t. There’s been a bit of a trend for the antiheroine as the protagonist in YA now, and this book would’ve been perfect from that trope!

Fire was a cutie, but I would’ve been more engaged if she was coming to terms with her powers rather than already being in a place where she pretty much had them under control. I guess to get the antihero we would’ve needed more of Leck’s backstory, which to be honest, after the prologue, was what I was expecting.

AGAIN so many people were in love with the main character, I mean there were the Dall brothers and Archer. Why is she in a love square? And her relationships with all three of them were unhealthy. I can never truly war up to a protagonist who isn’t decisive about her love interests. She loves Archer, and Brigan but because of sheer lack of communication no one could really be happy! It wasn’t definitely one of the most frustrating love squares I’ve never read. I mean the Prince wasn’t even a contender, really. His love sprang up out of nowhere. But if you liked the Throne of Glass series then you’re used to that sort of thing, so you’d enjoy Fire.

What I can say about this book in terms of romance was that there were a lot of pregnant women. I mean, it was a little confusing at times, but still it was so awesome to see that side of things in a fantasy, and definitely saves the rating of this book a little bit. Just like Katsa Fire had a strong sense of justice and equality and her revelations about romance and pregnancy were some of the most enlightening parts of the book. Thank you Kristin Cashore was giving us some strong female characters that are also soon to be mothers, because you don’t see that often!

Action wise, it was pretty hard to follow. Like the His Fair Assassin series by Robin La Fevers, sometimes the action would come from court faction members just recounting what happened on the battlefield or somewhere in the realm, which again made this a pretty slow book, that was definitely more character driven than plot driven.

I found myself overly frustrated with this book, so I only gave it 2 stars, but I had high hopes for Bitterblue to knock my socks off.

One thought on “Review: Fire by Kristin Cashore”