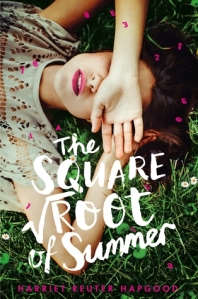 Now is the perfect time to start reading contemporary romances, and I’d heard a few great things about The Square Root of Summer. I was looking forward to a fun UKYA, with an ambitious time-travel element, after reading and being disappointed by Passenger by Alexandra Bracken. While I enjoyed the writing style, and the first 10% was really gripping, something about this book seemed to taper off towards the end.

The Square Root of Summer focuses on Gottie, who is asked to come up with an extra credit science project for a university recommendation. She just so happens to be experiencing wormholes during the summer, rocketing her back to the past, so she can, in some way, change the future. There are two important boys in her life: Jason, her ex, and Thomas, the one who got away, and Square Root deals with Gottie coming to terms with her feelings for both of them and accepting her current time line. Her grandfather also died recently, so she’s deeply affected by that.

Gottie – I really liked her personality. She was exactly the type of girl who was missing from the YA genre. Too often we see teenage girls who want to be writers (not like there’s anything wrong with humanities subjects!) and girls who enjoy STEM (science, tech, engineering and math) are sidelined. Gottie embraces science and math, and it was especially lovely to see a character motivated by that half of the school curriculum. I’m pleased they talked about more than the plant cell in biology.

Her emotions were really easy to read, too. The writing style felt a little unusual, in my opinion, like it was following Gottie’s thought processes, which was good for her characterisation, but a little difficult to follow.

Thomas – As a love interest, I didn’t really think he stood out much. I liked how he was interested in baking. Again, seeing a boy interested in sports and cars is obvious, but baking was a fun, different hobby to bestow upon a character.

While the concept of wormholes and getting to go back to the past to re-experience important events, sounds like a fascinating story structure, I found it a little confusing. It wasn’t that obvious when Gottie had gone back in time, so I often had to skip back and re-read the beginning of the sequence before it clicked. It was a little messy, I guess.

I enjoyed the diagrams and the scientific explanations. They gave the book an edge of reality, and simplified concepts that would have been hard to get your head around without someone drawing a map. The addition of illustrations makes it like one of my favourite books ever, Everything, Everything by Nicola Yoon, which is always a good thing.

I’m giving Square Root 2.5 stars. I wanted it to be more impressive, whereas the concept came across as understated. The pacing wasn’t bad, and none of the characters were unlikeable, but I felt like I expected more from this book. Overall, I thought it was a great debut, that put forward new character roles and personalities that I hope will become more prominent in the future, but maybe I should be wary of books with time travel in from now on…

2 thoughts on “Review: The Square Root of Summer by Harriet Reuter Hapgood”

Leave a Reply to Reg | She Latitude Cancel reply