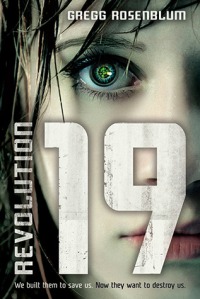 I picked up this book on a whim. I thought I’d heard someone talk about in on booktube maybe a year and a half ago. Now, I realise why there probably hasn’t been any discussions about it since. The main premise is robot apocalypse, right? Sounding pretty awesome so far? What it’s missing is character depth, an non circular plot, characters who learn from their mistakes and – not to mention – actual world building. So, welcome everyone to, what I believe to be, my first one star review of 2016.

There are Freemen. The ones on the outside, just living their lives in the forest. There are the Cities, where human are enslaved to robot overlords of their own making. If humans step out of line in the cities they risk re-education and death. If you do everything you’re supposed to in robot city you suffer no consequences and live a pretty chill and usual life, aside from the fact you have, you know, curfews and constantly feel like you’re being watched. Okay, it’s not so chill. But you still get to go to school, even though you’re fed an incorrect history of events.

The whole thing was circular. The kids would escape wherever they were, run into trouble, meet a random stranger that could help them out and then the cycle continued. I found it boring and predictable.

Cass – who’s probably only there to tick a female presence box. Her most prominent scene is when she’s playing a game of dodgeball. Really, it’s 2050 and we still play line tag and dodgeball in gym class? Her birth parents were killed by robots when she was a kid, so this gives her a thirst for revenge, even though she’s mostly benched throughout the whole book so Nick can take the glory.

Nick – acts like he knows everything. Thinks whatever he’s doing is for the sake of his family. Let me just stop you there, buddy, so you can actually have time to think. He also loves the idea of self-sacrifice to seem heroic, when really he’s not doing anything to really help the situation.

Kevin – the comic relief? Maybe? He’s also a wizzkid that knows pretty much everything about engineering and computer science despite living in a forest his whole life.

Lexi – only there to fill a transparent love interest void. Her family puts up the kids when they sneak into the city, so she serves a minimal purpose, and after reading this book I have literally no idea about what she’s like as a person.

Farryn – rebel bad boy that everyone knows. He’s the guy that knows all the good hiding spots. His character is still a huge cliche, but at least it’s an entertaining one.

I pretty much summed up all you get in the plot section. There was no integrated history of events or even much of a ‘setting up’ at the beginning. How the robots actually took control is super ambiguous, and it doesn’t look like we’re going to get to the bottom of it any time soon. If you don’t mind jumping straight in then maybe this wouldn’t be too bad for you. For me I was completely unsatisfied.

Overall, it was pretty similar to the movie Robot Overlords from 2014, which I didn’t enjoy either, but in retrospect it did a better job than this book, and I would recommend watching that instead. Suffice to say I will not be completing the trilogy, as I can only imagine it goes downhill from here.