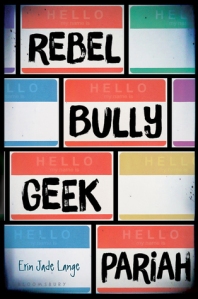 I’m pretty much a sucker for anything that tries to be The Breakfast Club. TBC is one of my favourite movies and The Breakfast Bunch episode of Victorious is probably one of the most beautiful episodes of any TV show ever. So, four kids whose personalities you don’t think will mix end up running for their lives together? Sounds like my jam. But here are couple of reasons why it failed to live up to my expectations, even thought it was still a fun and exciting read.

Four teenagers, who have never properly gotten to know each other (even though Boston and York are brothers), find themselves at the same party. There’s underage drinking and college reputations at stake and they need to get out of their fast. The brothers’ car is out of action so one thing leads to another and they steal a police car and end up part of a crazy adventure, and some serious trouble.

It sounds like something completely addicting and it was. It really was. I managed to read it in one sitting, because I was so desperate to figure out how it was going to end. It’s told in a Before, That Night and After structure, which is pretty typical for a thriller where some kind of crime is committed. The ‘After’ section is the present day Sam explaining to her mother while she’s in prison what happened on That Night. So from the very beginning we know something went awry. That Night follows the characters actions from Sam trying to buy back something her mother pawned to them being taken to the police station. ‘Before’ chronicles where/when Sam first encountered each of the other characters, or gives more information about her relationship with her mother. I found the structure to be really successful, even if it did make things a little more predictable.

REBEL: Andi used to be one of the ‘Barbies’ which is Sam’s way of saying popular blonde girls (which is wrong on many levels and I hated every time she used this phrase) until she decided to go from sleek and straightened to dreadlocks, get some extra piercings and wear oversized camo jackets. Andi likes to do things for a thrill and that is the most important thing about her.

BULLY: York, the older brother, he’s got at sports and pretty much everything but he ‘killed’ one of his teammates so doesn’t play any more. He’s turned into a bit of a meathead and is mean to hide his inner feelings.

GEEK: Boston, the younger brother, and super genius who’s going to graduate from high school two years early and has been accepted into a lot of high-brow Ivy League universities. He’s basically a plot device so the characters have an excuse to run away because they don’t want to ruin Boston’s future.

PARIAH: Sam is the main girl and the only one that gets a POV even though the title may lead you to believe otherwise. She was in a tragic accident when se was younger and as a result she’s super insecure about her hair. Her mother is a dug addict so she’s become very independent, but at the same time you get an overwhelming sense that she feels really lost.

Unfortunately, I didn’t think any of the characters, apart from Sam, got a detailed enough background history. Lange tried to include the impactful ‘Sitting on the Library Floor’ scene where the teens spill their guts out, but it just didn’t work. At that point, I didn’t care about any of their tortured souls enough because they kept making really stupid decisions about how they were going to get themselves out of trouble.

For added ‘feeling’ I suppose, Lange tried to inject some sort of romance between York and Pariah. It’s supposed to be that very sweet and totally unrealistic dynamic of most popular guy who’s got a ton of friends and probably insulted the girl at some point, sees how beautiful she is (Sam has super special eyes *eye roll*) and reveals himself to actually be a a sweet guy who has noticed her all along. PREDICTABLE and, more importantly, UNNECESSARY. Obviously, it’s nice that they can all be happy, but seriously? Their relationship felt so artificial, I wasn’t buying into it at all.

Rebel, Bully, Geek, Pariah wasn’t quite what I was expecting, but if you can forgive its obvious sins and just enjoy the wild ride these characters are about to take you on, then you’ll probably get really sucked into the story, even if you can see the ending coming from a mile away. I gave it 3 stars because it was fun, and if I’m not being too serious because it tries to used the TBC formula, then I can admit I enjoyed it.