The It Girl by Katy Birchall

This is another book that follows the geeky/awkward girl struggles through secondary school trope made popular by Holly Smale’s Geek Girl series. Any regular reader or watcher of Heart Full of Books will know that Maddie and I adore Geek Girl, and The It Girl is supposed to have a good sense of humour, so we both thought we’d give it a go! If nothing else, at least we’ll be supporting another UKYA author, right?

Anna is a little awkward. The story starts with her setting her worst enemy’s (the prettiest girl in the year) hair on fire…accidentally. Anna’s life is pretty uninteresting until her father becomes engaged to a super famous actress and Anna’s life is rocketed into the spotlight. I do love a good zero to star in no time story line (see: my love of Jem and the Holograms), so it sounded like something I’d really enjoy! I’d say the tone and plot are a combination of Angus, Thongs, and Perfect Snogging and The Princess Diaries. So, if that combination appeals to you, then why not pick it up?

Anna is quirky and obsessed with her dog (as I’m not really an animal lover I can’t say I related to this side of Anna’s personality, as a lot of the humour comes from her connection with the dog and the ridiculous things they do together (like recreating the ‘Circle of Life’ scene from ‘The Lion King’).) She was all-around liable until she started making some pretty obvious mistakes. Involving concert tickets that were promised to her best friend but given to someone else… Silly ones where she can’t see how she might be hurting other people. That kind of forced obliviousness for the sake of drama has never sat well for me, so I found Anna to be rather frustrating by the end.

What I really loved was the budding friendship between Anna and her soon to be stepsister. Even though Marianne is super cool, edgy and a bit older, The It Girl defies expectations and made them actually get on! It was such a relief that it seemed like this new blended family was actually going to work out well, as I feel you often read about step siblings hating each other. It’s actually one of the key elements that makes me want to continue the series.

Let’s talk about the humour. This is marketed as a funny book. so when I never actually laughed out loud, it felt like The It Girl had some up short on its key selling point. I may have smiled a few times, but I wouldn’t say I found it particularly funny. Sometimes, I felt the humour was even too try too hard for my tastes. Example: Anna’s best friend didn’t know who Iron Man was and kept calling Marvel ‘Marvin’. This book was published in 2015. 2 Avengers movies had been release to massive success and a real growth of the fandom. EVERYONE knows Marvel and Iron Man. So, it felt a like a receptive joke (and not even a realistic one!) used for cheap laughs. Plus some of the joke’s executions would not have worked realistically in the note/email format that the author kept trying to push. I mean, I love a good bit of mixed media communication, but it seemed like none of the characters knew what texting was. Instead, they insisted on passing notes in class, which…does anyone even do anymore or do you just type on your phone under the table? It’s a really nitpicky things, but something that really jolted me out of the story.

Overall I enjoyed it, though I’m glad I got it out from a library rather than buying it myself, and would love to get my hands on the sequel.

If you liked this, you’ll enjoy… 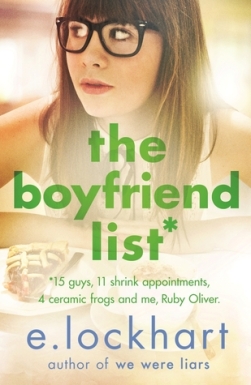