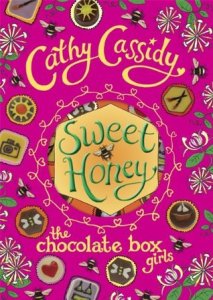 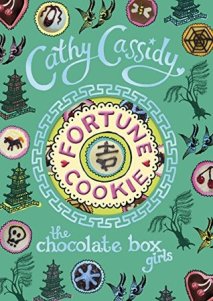 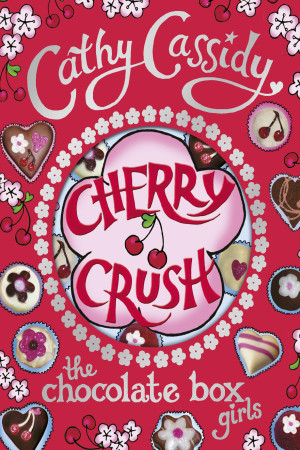 The Chocolate Box series is one of my favourite middle grade series. I remember when Cherry Crush was being teased on Cathy Cassidy’s website and getting so excited at the idea that she was going to be writing a series about sisters! I also remember in 2010 (when I was 12-13) thinking, ‘oh my goodness, I’m going to be 18 by the time I finish this series!’ (Though I was 19 in the end because she added a half-brother to the mix which bumped the series up to six.) I stopped reading when Summer’s Dream came out…I’m not entirely sure why… but it felt like finally the right time to complete my Cathy Cassidy reading experience! I’m so glad I did, because it’s chocolatey and beautiful.

I’ve read and re-read Cherry’s try so many times, and I completely loved it the first time and the second when I was 13. Going back now it’s a little different, but I still really like the blended family idea. Cherry’s mother died when she was a child and her Dad has been talking to a woman called Charlotte who he knew when he was younger. Paddy loves Charlotte so they pack up all their things in Scotland and move done to Tanglefield to pursue Paddy’s dream of running a chocolate business. For the most part, Cherry fits in with the Tanberry sisters, apart from Honey who is adamant on icing her out. Well…Cherry does fall for Honey’s boyfriend so what can you expect? I think structurally and emotionally this Cherry Crush will always be my favourite. I love the beach setting seen through new eyes and it really makes Tanglefield feel like magic. Also, more than any other story, so much goes on like the Chocolate Festival and the disaster on the beach. I will continue to re-read Cherry for a long time yet.

Marshmallow Skye was probably one of the most emotional books I read (the first time I read it). It was probably the first book I’d read that was focused on twin sisters and that special bond. I remember being a bit disappointed with it because it didn’t reflect the relationship that Maddie and I had because CC was perpetuating this whole ‘in the shadow’ thing and made her twins obsessed with the image of being ‘twins’ rather than individuals. And I get that some twins are like that, but I personally found it frustrating to read. Despite all that the haunting tale of Clara and her lost love that’s woven into the Skye’s daydreams makes this story the most unique of the series. I loved the blending of dreams and reality!

Summer’s story was probably the hardest to read. After putting a lot of pressure on herself to get a scholarship to a renowned  ballet school, Summer contracts an eating disorder which means we get to watch her slowly push away everyone that loves her. I thought Summer’s Dream did a really good job at showing the thought processes of a person with an eating disorder and how they can convince themselves what they’re doing is good for the future. But it was really painful to read about Summer rejecting the help of her sisters and those close to her. Also, it felt like Summer hasn’t learned anything about the relationship she has with Skye from the events of the previous book. The ending to both Skye and Summer’s books was pretty similar so in some way it was a repeat. I also thought there was a missed opposetunity to represent Summer as gay (or even asexual!) since she was feeling uncomfortable and trapped in by her boyfriend but it turned out to just be a lesson in finding the right boy. So, I lost a little faith there.

As Coco is the youngest Tanberry sister this is probably the story that felt the most ‘middle grade’. Coco is animal crazy and therefore obsessed with animal welfare and trying to save the world, so when he favourite horse from the stables is bought by a morally ambiguous man, she decides she needs to do something to help. So along with her kind of nemesis Lawry (who takes the place of a love interest) she steals the horse and hides her. Then comes the farce of trying to keep this horse hidden and reveal the true nature of the nasty man to everyone else so she doesn’t get in trouble. It’s a bit juvenile, but still super fun! Coco’s charisma and optimism comes in sharp contrast to the boy troubles faced by the rest of her sisters, so Coco Caramel is a bit of light relief before the book that everyone has been waiting for:

Honey’s story was always the one I wanted to read most. She’s sort of the antagonist in the series, but I knew she was only acting out because she was really hurting inside. Throughout the series so far there has been a big emphasis on the relationship Honey has with her dad. She’s still convinced that he is a loving father who’s only ‘accidentally’ abandoned his wife and children. (Which ironically is probably the most naive view of all the girls even though Honey is the oldest.) Honey has got into increasingly more trouble, getting in with the wrong crowd, skipping school and hacking test results (things that come up in the previous books) and this time Charlotte knows something needs to be done. So Honey goes to Australia to stay with her dad and while she’s out there she gets cyber bullied and hacked by a mysterious person leading to even more drama. I really liked how much more mature you could see Honey getting over the course of this book, and while the change of scenery meant you didn’t get to see the other sisters as much it was nice that CC was trying to focus on some ‘older teen’ issues. The format, like Skye, tries to do something a little different, incorporating emails and this series’ version of Facebook to give it a vibe similar to that of the Top 8 series by Katie Finn.

Now, this book might feel like a bit of an add on for no reason, but I think it perfectly finishes the series. It introduces a new half-brother, from the girls’ father’s affair, and makes us care about his problems while also giving closure for the rest of the girls’ futures. After a freak accident in the flat that they liven, Jake and family have to move out, and his mum decides to take them to stay with a guy she’s been seeing, named Sheddie, but Jake doesn’t feel like he really belongs and he’s caused too much trouble to face his family. So, after receiving some emails from Honey and thinking they were spam originally, he decides to go to Somerset from London to try and track down these long lost half-sisters! Fortune Cookie does a great job at resolving any remaining conflict now that all of the girls are reunited once more, and I really appreciated that. It’s the ending I’ve always been waiting for. So if you were thinking of skipping it just because it wasn’t originally part of the plan: don’t.