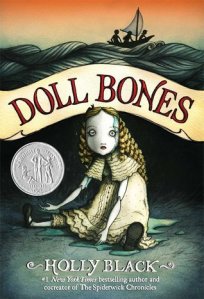 Okay, so I’ve sampled Holly Black’s YA books and her MG that’s co-written, so this is actually the first middle grade book of hers where there isn’t a secondary contributor. I feel like her writing is a bit hit-and-miss in general, and I’m sad to say that Doll Bones was a bit of a miss for me. It was an engaging story but completely over the top and I think I would’ve needed more elements of realism to properly enjoy it.

Doll Bones is a creepy story about three kids (Zach, Poppy and Alice) that have created an elaborate fantasy world that they play with a variety of toys. In a glass cupboard, sat watching over them as they play, sits the Queen. An old china doll that scares them all. That’s one part of the story.

The next is that Zach’s father hasn’t been around, and when he turns up he’s completely unsympathetic. He’s really against Zach playing with ‘dolls’ when really he should be astounded by the sheer imagination that his son possesses. So, he gets rid of ALL of his toys, meaning Zach feels like he can’t continue to play with his friends.

Then things get a little weird as the Queen seems to be coming to life and it’s up to the kids to take her to her grave so she no longer has ‘unfinished business’. The kids end up going on an elaborate adventure. This isn’t even the bit I found unbelievable. Yeah, they get into some sticky situations like rowing a stolen boat over a river, escaping leery old men, the works. It’s a little crazy, but the way that the kids are mature enough to really think through their actions was relieving.

What was really unbelievable, and you kind of have to ignore that if there had been some communication then none of this would’ve happened. And that is Zach doesn’t want to explain to his friends the situation with his dad.  Thereby making the whole thing ridiculous because Poppy and Alice are trying to rope him back into playing a game that he never wanted to stop playing in the first place!

Overall, it’s fun. If you can suspend your disbelief A LOT then you’ll probably enjoy it. (Just ignore the added romance to try and show the characters as mature??) I particularly enjoyed the added history, giving the recommended age group something to get interested in if they’re inspired. But, for me, I never felt entirely gripped or invested.