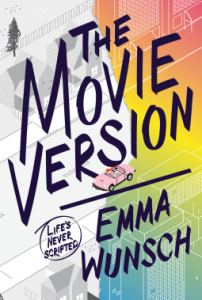 The idea of a character that constantly compares real life to the movies, and how it would be better if it was a movie, sounds like my kind of thing. I feel like I’m constantly quoting films or bringing them up in conversation, whether it alienates other people or not. So, The Movie Version was setting itself up to be good, but I didn’t realise it would be so great. With a great sibling relationship, a mental health issue and the trials and tribulations of first love, this book ticked way more boxes than I thought it would.

Things I loved about this book in no particular order:

The movie references –  I may not have understood all of them but like I said, I can always appreciate a good film reference. My particular favourite was the shout out to Mary Kate and Ashley movies, When in Rome and New York Minute (personal faves for obvious reasons.) It didn’t feel like an outlandish and forced quirk either because I’m testament to the fact that people quote films in real life all the time.

Best friends who care – I thought that Ray, Toast and Muppet were a great selection of besties for Amelia. I’m the kind of person that likes to give my characters weird nicknames based on foods, so I appreciated Toast on a different level. They weren’t pushing Amelia to talk about her brother or her feelings but they were interested enough to ask about him and check up on her wellbeing. Ray was my personal favourite. A cinnamon bun selling actual cinnamon buns at a mall food court. I loved that she didn’t get annoyed when Amelia lost her purse, or didn’t immediately tell her when she lost her virginity. She was very chill and great because of it.

Sibling relationships – The bond between Amelia and Toby was special. I thought the little film script moments that gave you flashbacks to their childhood and showed what an awesome brother Toby was, were sweet and well integrated.

Reading about how a mental illness affects everyone around the sufferer – Normally, when I read a book with a mental illness in it, said mental illness is usually affecting the main character, like Evie in Am I Normal Yet? Or a parent, like in Where You’ll Find Me. It was really interesting to read about a sibling suffering, because that’s something you can’t walk away from. They’re part of your family and probably close to your age. It’s important to consider how mental health has a rippling affect.

Sex scenes that weren’t romanticised – As well as being a book about a sister dealing with her brother getting diagnosed with schizophrenia, before all that happens, Amelia leads a regular life with a new boyfriend, Epstein. Although in other reviews I’ve read, some people didn’t think the romance subplot fit with the rest of the novel, I thought it was an excellent contrast to the emotional intensity, post diagnosis.

Abdi – arguably the best character, who was kind of like Abed from ‘Community’ (maybe it’s not a coincidence that their names are so similar??) He helped Amelia realise that she had more than a surface level interest in films and was a great addition to the cast of best friends.

Things to be weary of:

There’s only one real thing to note: how accurate a representation this is of schizophrenia. I can’t be sure, as I know very little about it myself, and don’t really feel like I can comment. There were a few episodes and scrapes that were really serious and I think I’ll wait until more people have read the book before making a decision about the mental health element.But, I definitely appreciated the visibility this book gave to schizophrenia, an issue I haven’t seen at all in YA so far.

One thought on “Review: The Movie Version by Emma Wunsch”