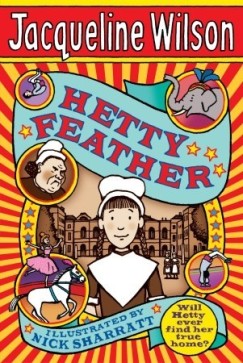 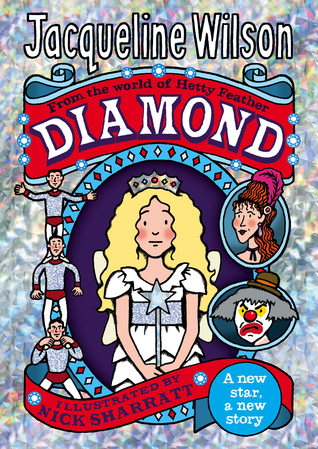 The Hetty Feather Series by Jacqueline Wilson
Genre: Historical
Published by: Doubleday Children’s
Pages: 400 | 400 | 432 | 304 | 512
Format: Paperback
Rating: ★★★★
Note: As this is a review of the entire series, certain plot points and outcomes are discussed that may spoil the series for first time readers, or people that haven’t completed the series!

Hetty Feather is such a change of pace from anything Jacqueline Wilson has written before. Set in the 1890s, it is the first in her Victorian series, featuring Hetty, a foundling girl with ambitions to join the circus and becoming a published author, whichever comes first. Hetty Feather is so unique because it reads like usual middle grade fiction, but has the makings of a classic. Hetty’s journey is structured very much like Jane Eyre’s, except it spans across three books! The first book is pastoral, fascinating and exciting. The circus makes such a wonderful setting, in stark contrast to the Foundling Hospital. Reading as Hetty gets torn away from everyone she loves: her mother, foster family and beloved Jem, is heartbreaking. No matter what she goes through, mischief, mayhem or injustice, you always root for her! It’s hard to think that the sequels are going to match up to such a marvellous beginning!

The sequel sees Hetty leaving the Foundling Hospital, growing up from eleven to fourteen within the first few chapters. Hetty is now of age to go into service, which was never what she planned, but in the countryside she finds a sweetheart, Bertie and kind, if slightly stern, friends in her fellow servants of her employer. There are cute dates reminiscent of the ‘Kiss The Girl’ scene from The Little Mermaid, and supposed ghostly interactions with a seer. You could really tell how much more mature Hetty was, but she still kept writing her memoirs, and the little meta references to the volumes were one of our favourite parts of the series as a whole! But, the Hetty books are kept moving forward by a change of scenery, so an incredibly mean-spirited reason is given for Hetty to flee to the seaside to be with her mother. Because Hetty can’t have her happy ending for long, Hetty’s mother falls ill and she has to present herself as a mermaid at the Freak Show by the seaside! It’s so radical, the kind of things Hetty gets up to, but entertaining to see how she keeps surviving against hardship.

Now trying to seek out the family she has left, i.e. her father, Hetty goes to the moors and becomes a fisher girl, although she’s not welcomed with open arms by her father’s wife. The list of jobs Hetty’s taken on throughout her life so far is ridiculous! After trying to make it work with her father, she’s called back to her first home with her foster family for a funeral. Here, she’s reunited with Jem, but has to juggle with her residual feelings for Bertie at the same time. She also makes a lovely friend called Janet, who’s extremely supportive and one of the best characters in the whole series. We loved reading about Hetty working the fabric stall at the market, and trying to be a little housewife and carer for her foster mother. With each new task Hetty’s given, you’re given a new reason to keep reading. The circus also returns, just to keep things even more interesting, and so Hetty faces the choice of following her childhood dream of performing for the circus, or living with Jem as his doting sweetheart. After reading nearly three books about her, it’s pretty obvious what her fate is. Hetty’s tried so hard to find a family and where she belongs, but even after a decade, her heart still lies with Tanglefield Circus! So, the ending may be predictable, and you may think that you’ve read all that just to come back to where it all started, but Hetty finally gets to do what she truly wants and we were incredibly happy for her.

Diamond takes a side step from Hetty’s life to let you know about the Acrobatic Child Wonder, Diamond, who Hetty meets towards the end of Emerald Star. She was such a little cutie in the third book, we didn’t mind reading a whole book dedicated to her life so far! In comparison with Hetty, Diamond’s life is extremely difficult, so full of abuse and neglect, it was hard to read at times. Everyone always told Hetty the circus wasn’t a place for children, and Diamond’s terrible treatment by her master is testament to the horrors! The saving grace of the book is the relationship between Diamond and Hetty which is pure magic, and together they create a little family with Madame Adeline as their guardian. Finally Diamond has people who care about her and who inevitably help her to lead a better life, away from the performing she hates! Although, in our opinion, this was the weakest book in the series, it was refreshing to read about a new voice and show that it’s not just Hetty who’s suffered in her life!

As the final book in the series, by this point, Hetty and Diamond deserve their happily ever after. They’ve worked so hard to get to where they need to be, but there’s still a misunderstanding between them that Diamond is the more talented but less motivated and Hetty wants this more than anything else. Watching them struggle to achieve their dreams on different terms was difficult, but in the end they come to a decision that benefits everyone, including Bertie, who’s popped back up again as Hetty’s love interest. I loved watching Hetty’s talents for sewing improve and in general reading about her becoming a young woman. Jacqueline Wilson has done the perfect job of maintaining Hetty’s personality throughout the entire series, while giving her room to mature, and while it’s still possible to see the girl with a temper we all know and love, where she and all the characters end up is extremely satisfying.

If you’re interested in historical fiction, middle grade and the bridge to YA, or are a long-term Jacqueline Wilson fan, you’ll love Hetty Feather for sure!