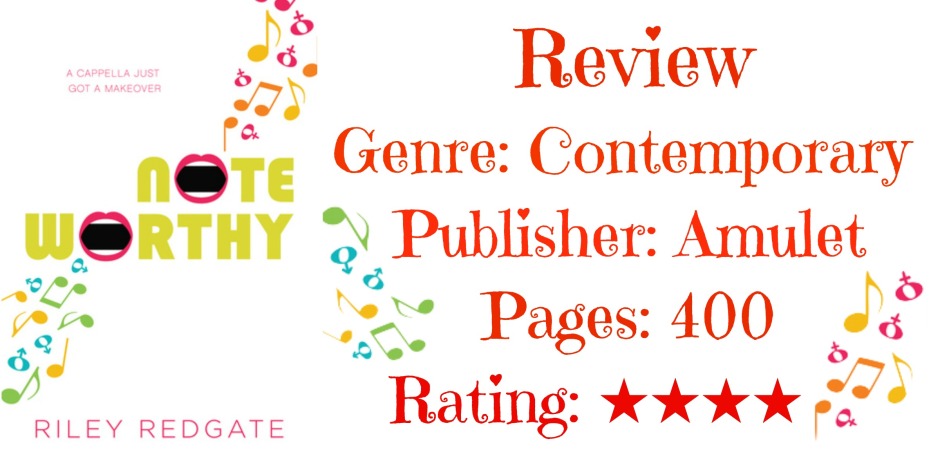 After really enjoying Seven Ways We Lie, we were excited to see what the super talented Riley Redgate had up her sleeve next! Noteworthy is the perfect mix of fun and series and it should 110% be on your radar.

Jordan Sun is trying to get parts in her school’s musical theatre productions, but her range isn’t what anyone is looking for. Then Jordan sees an ‘member’s needed’ sign for The Sharpshooters, an all-male a cappella band, and knows that this is her change. So, she cuts her hair, adjusts her regular speaking voice and slips into the audition with no one suspecting a thing!

I really wasn’t sure how music was going to translate to the page. I’m not a very musical person, so even the most basic of music theory references is going to alienate me, and my experience of a cappella is limited to – as I’m sure most people’s is –  the Pitch Perfect movies. However, I love a good music school setting – ‘Camp Rock’, ‘Raise Your Voice’ basically, whatever Disney churns out, I’ll probably be watching – so I was still excited to see what happened.

What I wasn’t expecting was the depth of these characters. Redgate takes everything to a more realistic level. Jordan’s family is struggling from some severe financial issues and everything could be taken away her at any moment. Jordan has also recently broken up with her long-term boyfriend, kissed a girl and liked it (🎶) so now she’s working out her sexuality.

IF THAT WASN’T ENOUGH then Redgate uses Jordan’s cross-dressing to talk about the different standards for boys and girls concerning behaviour and expectations. It’s subtle though, which only makes it more powerful. Oftentimes, if you get the feeling the author is just ranting at you, it feels completely inauthentic to the story, but Noteworthy handles everything with care, and it’s only brought up because it’s what Jordan is thinking about.

There are a lot of boys in Noteworthy, and yet each of them managed to keep hold of their originality. EVEN BETTER they each have their own issues to do with sexuality, hospitalised parents, struggling with their faith. Seriously, not one of these characters fell flat. The group was diverse on so many levels and it made their conversations so fun to read.

Obviously, there’s also great banter and pranks which make things silly and fun in an otherwise heavy narrative. Basically, each character really held their own while also bouncing off of everyone else, and I loved it.

As I said, Jordan is coming to terms with her bisexuality, and things are only complicated more when she’s cross-dressing. It’s a very subtle exploration though, unlike Our Own Private Universe which was a mess, Noteworthy isn’t trying to educate readers about being bi, because for some people, like for Jordan, being bi doesn’t have to be a big deal. She’s not really up in arms about it, and I thought it was also really great to see a non-angsty LGBTQ+ story, much in the style of Simon Vs.

There is also a little romance towards the end of the story which was very cute, but I liked most of all how it wasn’t the focus!

Also, I’m not sure where to put this, but it needs to be said. I thought it was so important for Redgate to acknowledge trans issues in this book. Jordan is not trans, though she realises that secretly buying boys clothes and becoming someone else (for trans people they’re becoming their true selves) is something that the trans community deals with everyday. I don’t think you can have a light-hearted cross-dressing story anymore without properly acknowledging that some people don’t do it for fun, for some people, it’s their lives. I was wondering if it was going to come up and thank goodness it did! *round of applause*

Noteworthy exceeded all expectations and really solidified Riley Redgate as an auto-read author for us! The way she captures character is absolutely incredible, everyone feels so real and complex. If you like music, or if you just like really good contemporaries, then Noteworthy needs to be on your TBR. A well deserved 4 stars!