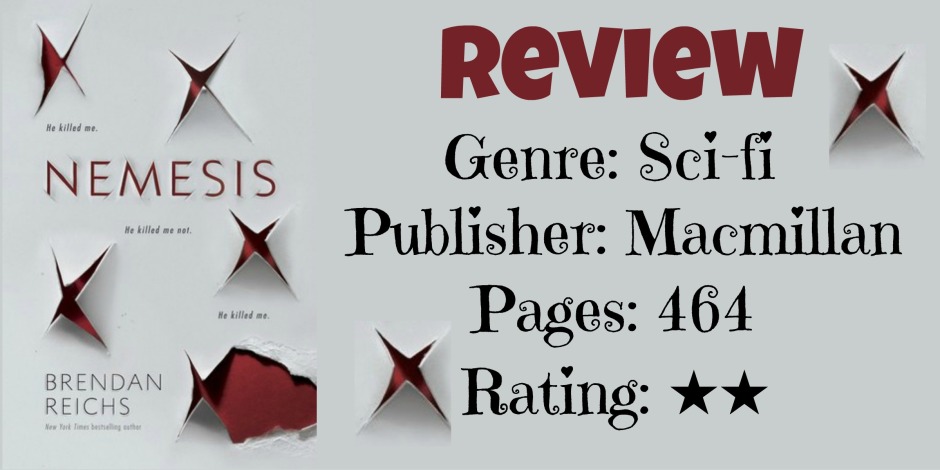 I wish I’d paid more attention to the Goodreads page before diving head first into the story, because that would have a) cleared up the genre and b) told me that this was the first in a series. Nemesis starts off as an unassuming contemporary with a mystery twist where Min finds herself being murdered every other year and waking up in the forest the next day like nothing happened. There’s also a thread about a potential apocalypse with asteroids threatening to wipe out the planet. Then things get a little crazy when Min starts to get the feeling that this is all a government conspiracy. (Hm, I wonder how she worked that out? Was it the psychiatric evaluations every other year or…?) Suddenly, Nemesis turns fill-on Lord of the Flies and logic is thrown out the window.

So, we’re got the basics of plot down, how about some thoughts? We’re going to go at this with a classic pros and cons format, since I had very mixed opinions!

Pro: Great premise! Being killed over and over again? What’s that all about? Tell me more!
Con: The answers were way too dragged out, I found myself losing the will to continue. Warning: there is such a thing as too much suspense. We need closure. Closure.

Pro: Female lead! (I mean, they’re pretty common in these kinds of stories, but I never get tired of kick-butt women.)
Con: *A male POV gets introduced 30% in.* WHAT? Now, I study Creative Writing at uni, and last semester we looked in more detail at narrative architecture (which is basically the rules you set out in your writing (often subconsciously) for the reader to follow) and if I learned anything, it’s that you don’t want the reader to suddenly stop being immersed because they question why a second POV was introduced so late to the story.

Pro: There’s no love triangle.
Con: There are two guys and one girl at the heart of this story though, so there is the potential of this developing later in the series, but let’s hope not!

Pro: Parents doing parent things.
Con: All adults leave the book for the last 20%. It’s necessary to the plot, but you know…

The biggest con ever AKA. the sentence ‘this is only just the beginning’ at the end of the book. Ugh.

Overall, I had too many questions about the logistics of the whole thing that I found suspending my disbelief too difficult to enjoy it. It was a little crazy for my liking too, and I’m not sure if I care enough about the characters to continue (although, I wanna know where Tack ends up) because this is more of a plot/concept heavy book. If you like sci-fi and pre-apocalypse novels then this is right up your street, but, for me, it was a dark alley I’m unlikely to go down again.