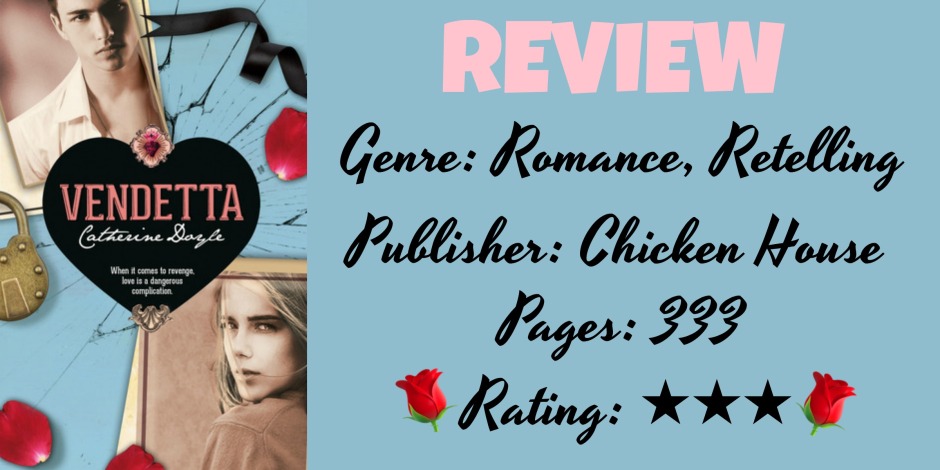 Vendetta has been on my TBR since our friend, Carys, raved about the author at last year’s YALC. Now that the event is under two week away (!!), it was finally time, after months of staring at it on my shelves wondering ‘when will this happen?’ and I read it. The only thing I knew going in to the book was that there was a slight Romeo and Juliet vibe, but with the Italian mafia thrown in. Cool. Also, I bought the other two books in the trilogy, so I definitely plan on continuing – every time I brought it up in a video, there would be at least a few comments telling me how great it is! So, let’s talk about my thoughts.

As any first book in a series is, this was full of tropes. Luckily, the tropes were all ones that I get on with. Apart from one, and we’ll get to that later. Our main character, Sophie, lives in a small town called Cedar Hill, where nothing happens. There’s an old and abandoned mansion that has recently been filled with five (yes, five) hot Italian-American boys. The combination of dull town, unsuspectingly gorgeous girl and the new hot boy influx is as cliche as it comes. (See: Twilight, The Vampire Diaries, a gender-bend Beautiful Creatures.) And Catherine Doyle does little to step outside of the cliche.

I was getting seriously Bella and Edward flashbacks when one of the brothers would take turns saving Sophie’s life, or fighting people on her behalf. I swear there’s a cut-and-paste moment of Sophie being like ‘But, you were there, you saved me!’ and Nic saying ‘I have no idea what you’re talking about.’ I was kind of trash for it, especially when two of the brothers grew more prominent.

There’s Nic, the one she sees first and so the one she falls in love with. He’s a bit of an outsider in his family and wants Sophie to be part of his life, even though it’s against family policy. I call him Stefan Salvatore.

Then there’s Luca, the one that doesn’t want Sophie at all, but is still rugged and handsome with a sexual magnetism stronger than Nic. He’s more tied to family life and doesn’t hold back in upholding the whole assassin thing. I call him Damon Salvatore.

Because this dynamic already exists, I have a sneaky suspicion that Sophie will be caught in a love triangle and chose a different brother in the end than the one she chose to begin with. The forbidden romance thread is something I hadn’t read in a while, and it brought with it all the swoon-worthy moments of romances past.

Most of the book is the brothers getting to know Sophie and Sophie uncovering the secrets of the Falcone clan, putting herself in danger and whatnot. I found all of this okay, but it wasn’t mind blowing. I feel like I’m still waiting for something to be uniquely Blood for Blood about the book that I want to read the second book straight away. It definitely has something to prove.

So, now for the naysaying. The trope I talked about earlier that I really didn’t like is one that may count as a spoiler for the book, but it deserves to be exposed. There are five brothers. One of the brothers, Valentino, who’s Luca’s twin, is in a wheelchair. He fulfils the role of tortured artist, sensitive and housebound. When Sophie is kept hostage in a warehouse to lure her uncle out of hiding, we find out that Valentino, rather than the evil uncle stereotype, is the villain. But it just went from one bad stereotype to another!

Really? There’s a link between villainy and disability? What the actual hell? We’re past this. We’re so past this, it’s cringey. It’s horrid and really tainted the story for me that Catherine Doyle went there.

And that’s my two cents on Vendetta. Overall, it was a good, if slightly predictable, play on forbidden love and family feuds that did enough to make me want to pick up the sequel. Fingers crossed it colours a little more outside the lines than this one did.