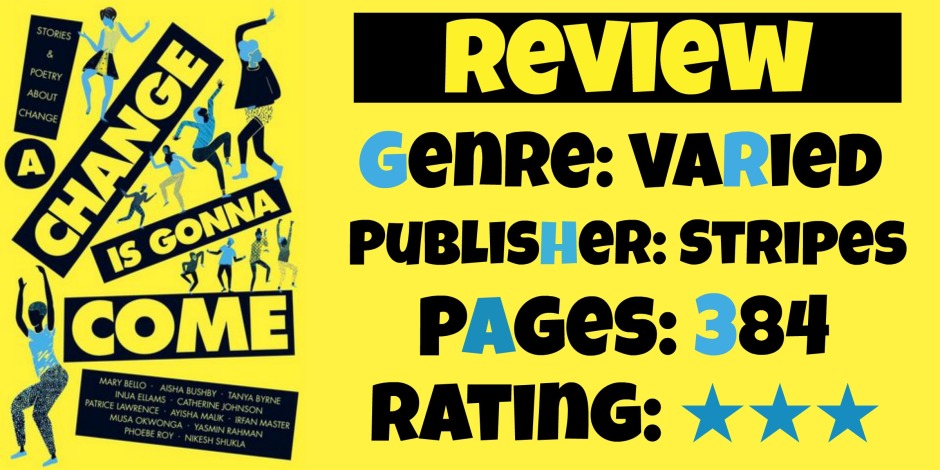 *Note: We received this book from the publisher in exchange for an honest review.

We’ve been hearing non-stop buzz about this book since Stripes Publishing’s first YA Blogger event in February. Now, it’s finally here and we couldn’t be more excited to see the final product getting so much love and attention! If you didn’t know A Change is Gonna Come is an anthology of short stories and poems based on the theme of change, all written by black and minority ethic authors. There are some big names, like Patrice Lawrence and Ayisha Malik, but also some debut authors getting their first break!

As if that isn’t cool enough, the anthology also has diverse characters too, representing lesbian and non-binary identities, as well as OCD.

We thought we’d share our thoughts on our favourite stories!

Hackney Moon by Tanya Burne tells the story of Esther and her best friend Sam who pulls away when their peers taunt them for being lesbians.

The narration style is really unique, with a sort of direct address but not from either of the main characters, so it’s got this almost fairy-tale vibe! We loved the dialogue particularly, and the friendship group is one we would love a companion series about!

We Who? by Nikesh Shukla (*our absolute favourite*) is set after the UK vote Leave, and the main character struggles when his best friend starts to post harmful new stories, which expose that they have incredibly different political views that become destructive to their friendship.

It was quite a shock when ‘Leave’ was announced as the decision the UK had made regarding our position in the EU, and it upset so many people that this story is probably the most powerful and relatable in the whole collection. It’s difficult to watch the people around you, who you previously trusted and loved, repeating ideologies that are damaging and down right untrue. The disconnect you experience to those you once considered friends when something like this exposes your fundamental and uncompromising differences, is something I think we’re more likely to experience in this political climate. And not just in the UK, but the world.

Iridescent Adolescent by Phoebe Roy about a girl who sprouts feathers and longs to be hollow.

We adored the writing style of this story, it was magical and mystical. It’s not often that I connect to writing that is poetic in this way, but it also had some real down-to-earth moments that made it a lot – not relatable, per say, but something along those lines. It felt like a fresh take on the ‘Change’ theme, and was a real gem among other contemporary stories.

Dear Asha by Mary Bello is about Asha who’s mother recently died and so she goes to Nigeria to connect with her remaining family. She then hears some pretty dramatic news about her father that throws everything into a new light.

We really loved the setting in this and the emphasis on Nigeria culture. It was so cool that although being of that descent, Asha wasn’t really connected to it, and so witnessing her get in touch with her roots was great. This was also a short story that had a lot going, so could easily have been made into a full length novel!

A Refugee by Ayisha Malik is about a girl who is forced to volunteer at the a refugee camp by her parents and develops a strong friendship with one of the girls there, Homa.

This was such a powerful story about different experiences and how we need to open our eyes to the hardships of other people and help out where we can. The fact that Ayisha Malik managed to write such intense character development in such a short story was astounding!

Fortune Favours the Bold by Yasmin Rahman is mostly about a Muslim girl who decides to start wearing a headscarf, which splits her apart from her twin sister and also means she’s subjected to more religious prejudice.

Again, we loved the storytelling. It was a very accomplished short story, and the character had a great sense of voice. We’re really excited to see what Yasmin Rahman will produce next, because I hope she becomes a new big name for YA fiction. After this, I predict she will be a new auto-buy author, and to feel that strongly about an author’s capability to continually make me feel SO MANY THINGS just speaks to how wonderful this very short glimpse of her writing was.

Overall, A Change Is Gonna Come is a really powerful anthology that It think everyone needs to read. It exposes some fresh talent, whose careers I can’t wait to follow, and raises the voices of those who are underrepresented in the best way possible.