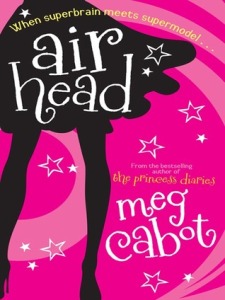 Having already made a post on ‘Airhead‘, the first book in the series, I thought it was best to review the rest of the books, however, I feel like I don’t really have a lot to say for the books, because the plot was very thin, so, this will be a culmination of my thoughts on both ‘Being Nikki’ and ‘Runaway’.

In my review of ‘Airhead’, I talked of how I was uncomfortable with the portrayal of girls just using their looks to interest guys, and the confused feminist messages that were coming across. Meg Cabot makes small headway to right this in ‘Runaway’, with the message that all girls are beautiful, and that beauty shouldn’t be the quality most desired by teenage girls. It was certainly the right thing to be writing about, when tweens and young teens are the target audience, but I still think appearance was being valued more than skill. 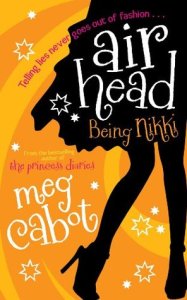 The plot seemed very laboured throughout both books. Em and Christopher were to bring down Stark Industries, and expose the brain transplanting surgery to the world. Although, this only happened at the end of the final book, it felt like a lot of unnecessary build up to get there. The spyware on Nikki’s computers wasn’t made a big deal of in the end, which I was surprised by as Em made multiple comments about it in the first book. A few different modelling jobs were thrown into the mix to keep it interesting, but I ended up just skim reading a lot of the book, just hoping to get to the action.

The discovery of Nikki and her family certainly added another element to the book, and certainly some conflict between her and Em. I was hoping, though, for a little more team work and a little less kidnapping.

I did think that Robert Stark’s evil mission was well executed and a good idea, that was just the right amount of menacing, I just wish there had been more of a build up to the discovery, rather than the characters just assuming something shady was going on.

Overall, I’d give the series 2 stars. They are all the kind of books you can read in a day, and are fun to read in the moment, but not very memorable outside the final page. I enjoyed the mixture of contemporary worlds with scientific discoveries, and from the cover or title, ‘Airhead’ definitely delivered something different to what I was first expected. But, maybe my younger self made the right decision not finishing the series, because by the end it felt a little laboured. Em and Nikki are certainly interesting characters, but not exactly great role models. That said, I was pleased with how the series concluded. It had a sweet, and compromising, epilogue.

It’s been a few years since I last read ‘Airhead’ and its sequel ‘Being Nikki’, so when I saw that the whole trilogy was in my local library, I was intrigued to get some closure on the series. So, here are my thoughts on the first book…which I may not have fully understood when I read it for the first time.

Plot
The basic premise is that this nerdy geek Em Watts and supermodel Nikki Howard  are in an accident together. As a result, Em has to get a brain transplant into Nikki’s body, making her an instant supermodel and legally obligated to fulfil Nikki’s contracts with Stark Industries, which is incredibly shady… (and not run by Iron Man, unfortunately.) END_OF_DOCUMENT_TOKEN_TO_BE_REPLACED