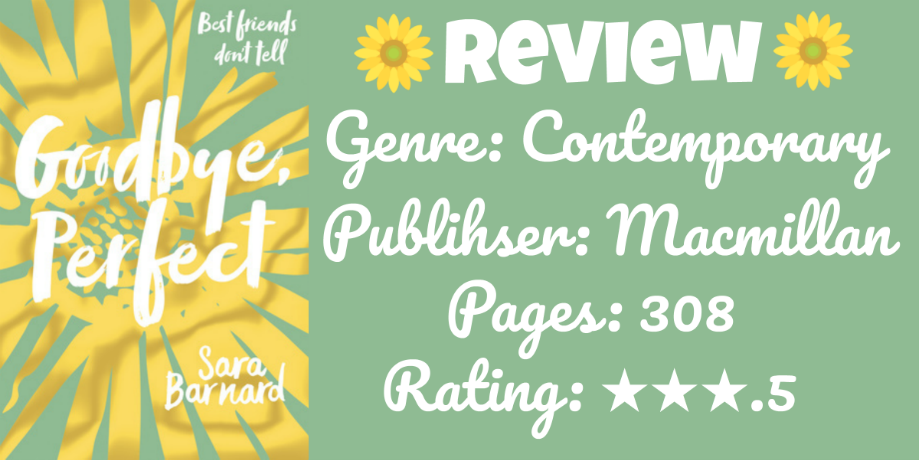 *Note: We received this book from the publisher in exchange for an honest review.
(First posted on Goodreads on 4th November, having read the book on October 29th)

I’ve been really delayed in writing my review for this seeing as I finished it at the end of last week, but I was hoping that if I left in for long enough and I mulled over ‘Goodbye, Perfect’ I’d love it as much as I did Sara Barnard’s other books. Unfortunately, that’s not the case. (Hence why the rating in the featured image and the actual review are different – I had to be more honest with how I felt about the book, and not just be lenient with my rating because I loved Sara’s previous two books.)

I knew nothing about the plot before I started reading, which was definitely a good thing because if I’d have known it was about a student-teacher relationship, I probably wouldn’t have picked it up – not matter who wrote it. That relationship is one of my most hated buzzwords. Luckily, it’s from the perspective of the girl who’s best friend is groomed, delusional and ‘in love’ with her music teacher, which made it more manageable and definitely had me questioning the strength of loyalty in the face of a criminal offence.

My opinion was very firm. Even if Bonnie is Eden’s best friend, she doesn’t know how much danger she’s in so Eden needed to tell the police everything. And while I was sympathetic to the difficult situation Eden was in for the first fifty pages, I couldn’t deal with the same thought processes throughout the whole book. How this book managed to feel so long winded (slow paced and – dare I say it? – dull) at just over 300 pages is beyond me.

The saving grace of the book for me was Eden’s relationship with Valerie, her older sister that she struggled to bond with when she was first adopted, and Eden’s boyfriend Connor who was just an all around great guy. (Having a character in YA be in a committed relationship before the book began and NOT have any drama surrounding that relationship during the narrative was so refreshing!) These characters were both most prominent in the last fifty pages of the book where things started to get interesting for the first time.

Another thing that kept me reading despite feeling like I wasn’t getting enough out of the story was the newspaper inserts and text message exchanges. I was just waiting for what ridiculously warped thing Bonnie was going to say about how happy she was to be with Jack (ugh.) I love that multi-media is becoming more and more prominent in YA, at least!

There were also a lot of things happening in the background of this story that were super interesting but not developed enough for me. For example, Eden’s little sister Daisy and her descent into being a young troublemaker/following the path of Eden from years ago. Or the fact that Connor was a young carer for his mother. Or the relationship Eden had with her birth mother. Or Eden’s identity as biracial (with a Brazilian father). All of these things could have added a little zest to a story that was too consumed by Bonnie running away.

Also, (rant incoming) I’m never a fan of narratives that make a straight-A student/generally ‘good’ girl feel like she’s missing out on the ‘teenage experience’ (which doesn’t exist!) Being a teenager isn’t a check list of underage drinking and disrespecting your authority figures. I was told this way too much by people in secondary school that made fun of me thinking a nice evening consisted of watching Call the Midwife and knitting. Just because Bonnie cared about her exam results, that doesn’t make her boring or not worthy of her story being told.

Overall, this book gets 2.5 stars from me and I’m beyond disappointed that I can’t call this Sara Barnard’s best book yet. But she’s still one of my all-time favourite YA authors and I’ll just keep my fingers crossed that her next book is more my thing.