They mentioned that the included book had LGBT protagonists so we were immediately excited! (If you don’t want to be spoiled on anything in the box then click away because you’re about to be bombarded with pictures!) 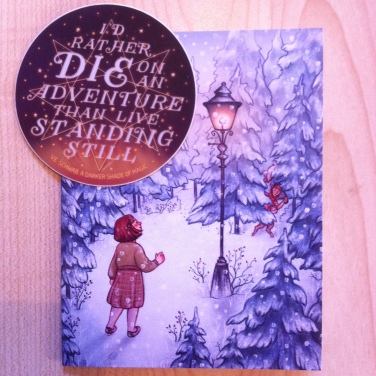 Our favourite things from the box were definitely the sticker and the card, we will definitely be following up on the artists! Then there’s the book which is Of Fire and Stars by Audrey Coulthurst, a fantasy I’m really excited to get to, hopefully in the beginning of the year! So look out for our review! As always Owlcrate include a letter from the author about their book, and this one did a really great job of describing the book since the back of the book is filled with authors praising it! There’s also a bookmark to match!

Thank you so much to Owlcrate for sending us this EPIC (*wink*) box!

If you’re interested in subscribing to Owlcrate then check out their website! The theme for January’s box is CLASSIC REMIX, and there was lots of Alice in Wonderland graphics, so it sounds equally as exciting!

What’s your favourite EPIC fantasy book?
If you’ve already read Of Fire and Stars what did you make of it?
Are you Narnia, Harry Potter, Game of Thrones or Lord of the Rings?