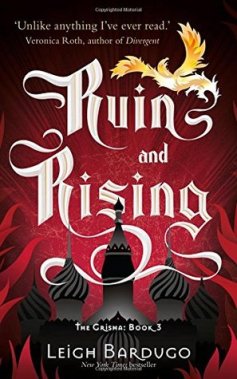 P L O T
In the final book of the Grisha Trilogy, Alina and Mal must hunt for the final amplifier in hopes of destroying the Darkling and his power once of for all. Full of action, tragedy and the occasion sweet kiss, Ruin and Rising is one of the best series finales I’ve ever read.

The characters have reached their climatic peril. It’s all go for the gang. How many other ‘this is it!’ quotes can I put in a plot summary? Basically, we’re in for a wild ride. (Woohoo, cliche counter cracked!)  END_OF_DOCUMENT_TOKEN_TO_BE_REPLACED

This was the best event ever!

Seriously, though, this was the BEST. We only managed to get tickets for the event two days ago, and weren’t even aware that the signing was happening until this week, so it’s been quite a whirlwind adventure of tracking down ‘Six of Crows’ and meeting one of Bee’s favourite, favourite authors.The event was scheduled from three until five o’clock. We had to pay £3 each for the event, but had no idea what was in store (literally, ahah!) We’d met Sarah J Maas earlier in the year, and for that we were allowed one book signed and one dedicated, with no photo ops and only a badge to remember the event by. THIS signing was unlike anything we’d been to before.

After running around the entire building to try and find just where they’d decided to hide Leigh Bardugo, we eventually made it to the top floor where seats arranged like a mini theatre, with two chairs stationed at the top. We had no idea how exclusive the event was, and we’d guess there were about 30 people there in total. Luckily, we managed to snag seats in the second row, so our view was fantastic! Also, Leigh is incredible at projecting her voice so no one missed anything she said.

The even started with a reading, probably about 4 pages from roughly the middle of Six of Crows giving us a delicious insight into the relationship between Nina and Mathias, and also an example of her Irish accent! Next there was an interview for about an hour, with really intriguing questions that covered the majority of the basics about the book, the Grishaverse and her writing process.

During the interview process, Maddie decided to whip out her phone and take some notes so that we could remember all of the  quirky details and funny stories that Leigh told, so we’ll share a few:

Then the floor was open to everyone else to ask questions! But, we’re going to do a separate blog post on all the interesting, writing advice that Leigh gave us!

We both got a copy of Shadow and Bone and Six of Crows signed. Leigh asked each of us who our favourite characters were from the Grisha trilogy, and personalised the dedications in our copies accordingly! (Isn’t that such a sweet touch? Bee said Alina and I said Nicolai!) The three of us talked about our unusually American names and their origins, our degree as Creative Writing students and who we wanted Alina to end up with at the end of Ruin and Rising. I got to tell Leigh how Bee recommended the series to me, and how it got me into the high fantasy genre, and Bee got to gush a little about Laini Taylor (any opportunity!) I also got a book recommendation from Leigh, and she compared us to Cath and Wren from Fangirl! (Isn’t that the best compliment ever?!! 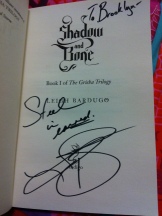 Oh gosh, it was genuinely one of the best afternoons of our lives. We’re so pleased we got to take advantage of the opportunity and that we now have a beautiful book to read, Six of Crows.