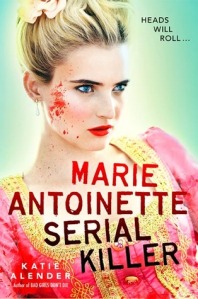 This was another library book that I picked up without knowing anything about it before. It’s so invigorating to just read something you know nothing of, I don’t know, there’s just more excitement. ‘Marie Antoinette, Serial Killer’ intrigued me because of the string of murders (hence the ‘serial killer’ bit) by a ghost. It all happens in Paris, France on a school trip. Yippee!

I’d say this book was a very quick read. The writing style was simple to understand and the main plot point of the story was explored immediately without any faff. Although the main character annoyed me at times, as all good main characters do, I thought she really evolved through the events of the book. She grew more of a backbone and realised what was more important to her: true friends over popularity.

The romance was sweet, and short, as it would be if the school trip was only for a week. It all just felt very…French. I’ve only been to Paris three times, once in real life, once in ‘Anna and the French Kiss’ and once in ‘You’re the One that I Want’, so I had a pretty good grasp of the setting and the main tourist attractions.

I loved the slightly historical element of the book, telling the reader about Marie Antoinette and her life, and death as it goes. I didn’t know much about the French revolution, so it was nice to get those snippets of context. I think this also aided my enjoyment of the book, since it had a ‘Ruby Red’ feel to it. Just keep in mind there’s a ‘historical note’ at the back, saying that the characters are obviously fictional, all but Marie herself.

The murders were written tastefully, with very little or no graphic detail. All very PG. I loved the suspense that they built and the sense of dread I had towards the main character, Colette’s safety.

I didn’t so much like Colette’s ‘friends’, both of whom were vapid and conceited. I much preferred Audrey and Brynn, and in the end, so did Colette.

Overall, I’d give this book 2.5 stars. Despite enjoying it as a whole, the beginning of the book was slow and the fact I didn’t like some of the main characters detracted from my enjoyment. I thought the mystery of the killings was too easily solved and resolved, though I did like the Lara Croft-esque bit towards the end. I’d recommend this to anyone interested in a short and fun read, who isn’t too interested in lots of plot depth. Generally, a good library find!