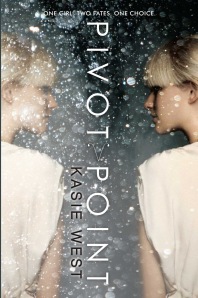 I borrowed Pivot Point by Kasie West from my local library and I liked it so much I think I’m going to have to buy it for my own library. I also need the sequel, pronto.

There wasn’t an awful lot of world building, but I got the general feel for the Compound and really enjoyed the sections where we learnt more about the mind powers and the variations of those powers. Although I love the X-Men I haven’t read any YA where the main feature is super powers, but I guess, in a sense, Pivot Point isn’t primarily about the powers themselves but what they are used for.

Addie’s power is ‘Divergence’ meaning she can preempt the outcomes of her choices by looking into her future. The story is split into two alternating futures where she chooses to live either with her Mom, or her Dad after their divorce. I was gripped by the characters on both sides of Addie’s choices, and right until the end I couldn’t decide which one I wanted her to pick. However, when it got round to making the decision I knew which one she would go for, and it wasn’t what I wanted. Alas, I hold out hope for Split Second because I am not willing for Addie to let go of that part of her future.

Dramatic irony plays a very lead role in Pivot Point, because after something happens in one future, it happens again in the other but you get it from the ‘Normal’ rather than ‘Paranormal’ perspective and visa versa. This meant that I was gripping the edge of my seat in the final chapter pre-choice because I knew what was going to happen but Addie didn’t! She can’t say I didn’t try to warn her.

Despite dramatic irony I didn’t manage to guess every plot twist – apart from the obvious ones. I think this is one of the main reasons why I am going to give this book four out of five stars. Not only did I enjoy Addie’s character, although she was slightly annoying in places I forgave her due to circumstance, but I was incredibly impressed at how easily the storied blended together and how easy it was to follow both without being confused. I loved the story as a whole; it was a wonderful break from some other more intense reads and was the perfect thing to get me out of Lola and the Boy Next Door withdrawals.