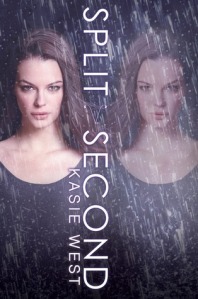 Contrary to the majority, I actually enjoyed Pivot Point more, although this book really did tie up all the loose ends of the series I felt that it was kind of tedious, and certainly not as gripping as the first book. I think the addition of Laila’s voice added to the story, but the differing perspectives weren’t as enjoyable, for me anyway, as the two different voices of Addie that made Pivot Point so original.

I think the underwhelming nature of Split Second comes down to the fact that we knew both of Addie’s futures, therefore when Trevor and Stephanie are re-introduced we already know how Addie feels about them, so there were no real surprises on Addie’s side of things.

Leila’s side was intriguing because got to spend more time in the Compound, which I think could be explored a lot more, and I would love to see Kasie West write multiple series in the setting. I was disappointed with Laila’s character development, although she seemed to get over her commitment issues, I wanted to see how she dealt with the situation with her father, which was left wide open. Her relationship with Connor was adorable, but predictable. Although I have to say that his power was really interesting, and his back story was explained at the perfect pace.

Other than being boy-crazy and loyal to her brothers Laila wasn’t a very complex character. And her main goal was to find out how to restore memories, which was resolved quickly and easily. Addie also had new developments to her power, but again I wanted them to be explored even more! The conflict with the Compounds authority seemed to be resolved too easily, and there was a lot of room left for more conspiracy. Making Split Second seem slow paced and repetitive (not in a good way.)

I did like the ending, and the plot twist of the Grandad. I really didn’t see that coming. And I also liked how Addie’s Divergence was handled in the narrative, because unlike Pivot Point there couldn’t be a new chapter for every alternate future.

After thoroughly enjoying Pivot Point, it feels wrong to only give Split Second 2.5 stars but I hate to admit that I found it kind of boring. The series tied up really well, and I loved how the ending wasn’t ambiguous, but at the same time it seemed very convenient. Justice was served to the evil doers, romance for both girls was in the air, and they didn’t get in trouble for any of their mischief! I don’t regret finishing the series, but I’m glad that it was only duology rather than a trilogy as It think that would’ve drawn it out too much. Overall, it looks like Split Second was a prime example of the negative effects of being over-hyped to read a sequel.

One thought on “Review: Split Second by Kasie West”