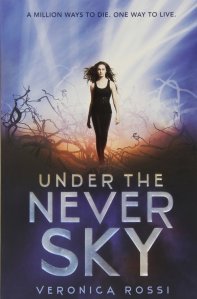 r Sky by Veronica Rossi
Genre: Fantasy, Supernatural, Romance
Published by: Atom
Pages: 374
Format: Paperback
Rating: ★★★★★
Series: Through The Ever Night (#2) | Into the Still Blue (#3)
Where to Find: Goodreads | Amazon

This book has definitely made its way on to my favourite shelf (the hypothetical one on GoodReads because this is actually Bee’s book!) ‘Under the Never Sky’ definitely fulfilled the expectations I had for it after seeing that people were labelling this series as addictive as a class B drug.

One of the only criticisms I have surrounds the romance between the main characters Aria and Perry. Of course, it was adorable and meant to be, but it felt like their romantic feelings for one another came out of nowhere. Perry’s attraction to Aria was very sensual (literally) though I felt this wasn’t enough. It read very much like “What is this strange feeling I’m having for this girl? It must be love. We’re soul mates!” It was lovely that he didn’t second guess his undeniable feelings for Aria though I would have liked a more obvious build up. They have sex for goodness sake!

So, at the beginning of the book, I was slightly confused. The plot seemed familiar. And then it hit me. ‘Fearsome Dreamer’: the concept of living in an imaginary world was exactly like the world of one of my favourite books ever. Instantly, confusion became joy and I just read without questioning the setting. The world building was bare, but I was involved. I really enjoyed the almost two perspectives while still being told in third person (which is a rare occurrence for me.)

Something I wasn’t expecting was for there to be magical powers involved. This instantly ticks off one of my criteria to be a favourite book and probably gave this review an added star. I thought that uses senses as powers was completely different, especially scent as we’ve all read a book with a Seer in and that can be quite cliched.

As the plot progressed, admittedly slowly and with limited direction, using the introduction of new characters to pull the story along, I relished in the survival aspects. I loved how the title of the book wasn’t obscure or irrelevant and neither was any character. However, that being said, I did think that everything was a little too convenient. Roar appeared just when they needed back up. Cinder appeared just when the couple needed their enemies to be annihilated, Perry found some boots and a coat just when Aria thought she was dying. I found the setting very hard to imagine. Was it a wasteland? No, there was a forest with berries and badgers. Was it a forest? No, there were barren bits of land with rocky outcrops which offered shelter at just the right moment.

I found the ending hard to commute; ultimately, I was confused over why Aria and Perry split up. Couldn’t they have done each task together? Everything just seemed a bit rushed at the end, with classic sentences like ‘two months later’ blah, blah, blah. More closure could have been given, although the ending did present a task that would, no doubt, be conquered in the second book.

Will I be reading it? Yes.

Would I recommend it? Yes.

Wow, my first five star review in a while! This book would be great if you enjoyed ‘Fearsome Dreamer’ by Laure Eve as much as I did, or ‘Fire and Flood’ by Victoria Scott as much as Bee did. I look forward to hearing what Bee thought of this book – all I know is that for her, it definitely wasn’t a five star read!

3 thoughts on “Review: Under the Never Sky by Veronica Rossi”