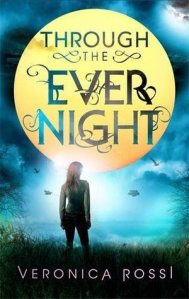 Through the Ever Night by Veronica Rossi
Genre: Fantasy, Romance
Published by: Harper Collins
Pages: 341
Format: Paperback
Rating: ★★★
Series: Under The Never Sky (#1) | Into the Still Blue (#3)
Where to Find: Goodreads | Amazon

It seems that my opinion of this series has drastically changed compared to my five star review of ‘Under the Never Sky.’ However, sequels never really sit well for me. I thought that this book was really just a filler, without much plot, to propel us to the finale ‘Into the Still Blue.’

Romance
First of all, Aria and Perry spend a lot of time apart.  Aria’s going off on her quest to find the Still Blue, but ends up running into some trouble with Roar, Liv and the Horns tribe. One thing that did redeem this love story was the Perry was given multiple opportunities to ‘cheat’ on Aria, or feel jealous and doubtful of her love, but he didn’t. When Kirra was plonked in front of him, he knew it was wrong. When Kirra planted seeds of doubt concerning the nature of Roar and Aria’s relationship, he was self-confident about his and Aria’s feelings. Go Perry!
As for Roar and Liv, a character mentioned the entire way through the first book, they are finally reunited, but only for about twenty (if that) pages of the book before they’re separated again. I won’t tell you what happens, but it’s kind of ridiculous.

Plot and Pacing
As I said, this book felt like a filler. Some things happened, like Aria getting poisoned and Perry getting beaten up by the sea, but I felt there were only a couple of main events throughout the novel: Perry being accepted as a Blood Lord and Aria finding a way to the Still Blue. Oh, and Cinder. We can’t forget that kid. I liked that Talon and Clara were rescued, that Soren came back from the first book, and we got to find out what happened with Liv, but it was all so non-consequential. I read 100 pages and wondered what had actually happened.

Overall, I’d give this book 3 stars. This book kept me interested, so therefore fulfilled its enjoyment purpose, however, nothing about it struck me the same way the content of ‘Under the Never Sky’ did. I look forward to continuing the series, and have my fingers crossed that this trilogy doesn’t have ‘Matched‘ syndrome.

3 thoughts on “Review: Through the Ever Night by Veronica Rossi”