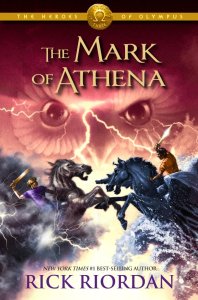 Everyone is back together! Right where they should be! Mark of Athena really kicks of the series, in my opinion. The main enemy has been set out, and the characters are all there are ready to go. Also, character relationships have been planned carefully so conflict can only ensue! I was so excited to continue this series, and boy, has it gotten better. But that cliffhanger. That cliffhanger, thank goodness I don’t have to wait for House of Hades.

Despite what the American cover may suggest Jason and Percy get on really well. The scenes when they were together, we actually some of my favourite. Reading Mark of Athena made me realise how much I’d missed Leo and Annabeth. They’re my two favourite characters (and Percy, of course!)

I wouldn’t say that Mark of Athena had a predominant character that took up the majority of the narrative although we didn’t get the perspective of Frank or Jason. In the beginning I thought that Piper was probably the weak link in the seven, however each character got to go on a mini quest that displayed how awesome and necessary they are to the story – so if you had your doubts, don’t worry it’s explained! It was lovely to read from the girls’ perspectives again, they kept the boys in one whilst also being totally kick-ass.

There may not be a main character, but Annabeth was the focal point, because following the Mark of Athena was her quest and she had to go alone. in her narrative you realise how insecure she is – how insecure they all are, really – but you also discover how amazing she is in high pressure situations. The relationships she shares with Percy in this book is so literally squeal out loud adorable that I found it hard to put down.

As to be expected this book was jam packed full of adventure and mini quests. Riordan still mostly had the characters working in threes, but he always mixed it up a little. I loved seeing the friendships develop in the characters that hadn’t met before, one of my favourite scenes being the Percy/Jason/Piper quest. They was not a dull moment. There was just the right amount of angst and romance to make me certain that this series is not just for kids.

The final section of the book was a killer. Only fifty pages left to go and I was thinking “we’re right in the thick of the story!” I knew the cliffhanger was coming, but I didn’t know that it would be that devastating! Percabeth forever though, thank goodness. Because of all these amazing factors I couldn’t give this book any less than four stars. It had all the elements I needed to give it that rating, but I was still left wanting more, and I still hold out hope that the series will get better and better.

5 thoughts on “Review: The Mark of Athena by Rick Riordan”