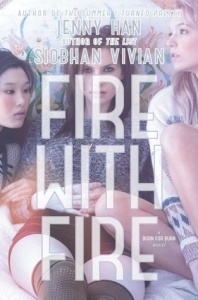 The ending of Fire with Fire was so unbelievably unexpected that I literally gasped and slapped my hand over my mouth. I was literally on the edge of my seat for the last twenty pages because OH. MY. GOSH. I enjoyed Burn for Burn – mostly because I could read it in a day – but I wasn’t completely blown away by it. This sequel, however, is probably one of THE BEST sequels I have ever read. It’s no secret that I’m not a big Jenny Han fan (sorry!) but these books are above and beyond what I’ve read from her before. I definitely must read Siobhan Vivian’s novels too! Basically, if you haven’t started this series yet: get on it!

Lilia really came into her own in this story. Suddenly she’s not just the rich, pretty girl who is friends with all the popular kids (I honestly hope the social hierarchy isn’t as bad in real American schools) but she’s an independent girl who’s actually making decisions for herself. Lilia made some bad decisions, but I really liked her progression as a character. Is it bad that I want her and a certain boy to work out? Because their chemistry is undeniable and the tension between the two! Gah. I thought I hated this guy and then he shows a sensitive side. I just wished he had a bit more courage to stand up to his friends and forget about images. I’d say I  enjoyed Lilia’s perspective the most out of the girls.

Kat was my favourite from Burn for Burn. She’s just as excessive and loud and I loved how realistic her narration was. One of the really great things about these novels is how different all the girl’s POVs are. You could literally read the whole book without looking at how was telling the story and know exactly which girl was which. We learned a lot more about Kat’s family this time and the lengths she’s willing to go for her friends. I’m not entirely sure how Ashes to Ashes will progress with Kat’s story as I feel she’s mostly the light relief and the girl who sorts everyone else’s problems out.

Mary really changed in this book. The only thing I really hated was how hung up she was on Reeve. Seriously? This guys is still mean to you, and you’ve already broken his leg and ruined his career, is that not good enough? Move on! The big reveal at the end was so crazy. Although I’m questioning the logistics, I’m so intrigued!  I hoped the supernatural element would be explained or at least enhanced in this story, and it was to a certain extent. SO many things make sense now, and I really want to know whether the authors planned this all along or just somehow managed to work it into the story. My crack pot theory is (SPOILER ALERT) that only the people with a broken heart can actually see Mary. (SPOILER OVER)

The plot was a slow build and to begin with I thought I was going to give it less than three stars, but oh my was the slow build worth it! Tensions rose consistently throughout the book and Lilia’s new role in the scheme had me constantly worried that something bad would happen. I loved how there were constant knocks to their plans and there wasn’t really any smooth sailing. There were so many moments where I thought everything would come crashing down, especially as Rennie’s out to get them. Retrospectively, I don’t think there’s any part of this book that I didn’t enjoy. It was beautifully constructed and wonderfully written and I absolutely cannot wait to read the final book in the series. A well deserved 5 star rating!

2 thoughts on “Review: Fire with Fire by Jenny Han and Siobhan Vivian”