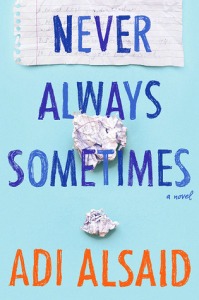 I think, for me, this was another case of misleading blurb. The whole list idea got me thinking this would like ‘Since You’ve Been Gone’ by Morgan Matson, but overall, I was disappointed with how this turned out. The premise is two friends, David and Julia, write a list of things they never want to be in high school. Sounds promising right? Well, for me, this didn’t hit the mark.

Characters
David and Julia. Two classic characters. Best friends like Simon and Clary, with the same kind of romantic attachment going on. Julia, in classic manic-pixie-dream-girl fashion, is quirky. She dyes her hair pink and refuses to wear shoes. David loved her from the beginning, but having never acted on his feelings, let them become something that resembled infatuation instead of love.
For characters so desperate not to be cliches, I found myself being able to anticipate their actions pretty easily.

Romance
If only David had told Julia how he felt, because, apparently, with no prior hint to this feeling, she liked him back. But only when he started to genuinely like another girl, Gretchen, who was a lovely, great character. The romantic relationship that was attempted and pursued by David and Julia just felt wrong, like they were only full of desire for what could have happened between them, and failed to recognise how they actually felt.
I just didn’t like the way David’s at-first-unrequited love held him back from liking Gretchen. I know that letting a crush form a barrier over your heart is the first possible thing and stops you from seeing what’s really in front of you. And how the relationships ended up? I couldn’t deal with the fickle feelings of both characters, and the unprecedented jealous Julia felt towards Gretchen, when she could have been David’s girlfriend if only she’d admitted her dormant feelings sooner.
The whole situation just made me want to firmly shake the protagonists shoulders and scream.

Development
David and Julia wanted to avoid cliches. The prologue was when they created the ‘Nevers List’ of things they wouldn’t do: including fall in love with your best friend, date cheerleader stereotypes, etc. Next thing you know, it’s four years later and they want to complete the ‘Nevers List’ as a final high-school experience.
The thing I liked about the story was its ability to dissect cliches, and make people realise that the cliched high school experience doesn’t exist. Gretchen was more than a cheerleader. She cared about the earth and taught David to drive. I really liked their interactions and the realisation that no one really fits a label. We are all capable of being more than one thing.
But, that didn’t stop me from rolling my eyes out at the cliches. But then, maybe that was the point of the book?
As for the story telling, I’m not sure I really got on with the writing style. Every time something I thought would be interesting was about to happen, it would cut scene and I wouldn’t get to read about it! Generally, some events in the book felt a little stunted and perhaps if things had been elaborated, I would have got on with the story better.

Overall, I’m going to give ‘Never Always Sometimes’ 2 stars. I was expecting something so different from what was delivered. And, when I really don’t get on with the main characters, and have no one to root for, it makes it hard to enjoy a book written about them. I think the book is still worth reading, if you’re willing to put up with cliches and hair-pulling moments, but if you’re looking for a bucket list book, try ‘Since You’ve Been Gone’ instead. I haven’t read ‘Let’s Get Lost’, Alsaid’s debut, but I hold out hope that I’ll enjoy it more than ‘Never Always Sometimes’.