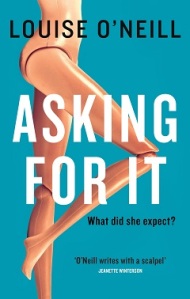 After reading Only Ever Yours and not really understanding the message behind the piece, I thought I’d try Louise O’Neill’s latest book, Asking For It, with a very clear message about sexual consent and abuse. I knew from just looking at the book that it was going to be difficult to read, but I’m so pleased I did. Here’s why…P  L  O  T
Emma is a very popular girl. She’s got all the boy’s attention, a group of friends and a desirable body. After getting drunk and drugged at a party, Emma is gang raped by three boys, all pillars of the teen community. The book is split into two parts, before the party and a year later. In the aftermath of Emma’s traumatic experience, the case is put forth to court and she becomes an anxious, social outcast, abandoned by her friends and commodified by the news for her story.

C  H  A  R  A  C  T  E  R  S
In the first half, Emma isn’t very likeable. She’s mean to her friends, ungrateful and spiteful…the Alison DiLaurentis of her inner circle. But bad things always happen to the pretty girls. I think her rude and terrible behaviour was used to juxtapose the transition she goes through after the rape. It makes it more obvious that she was deeply affected by it. She can’t  see herself as a human anymore, but a body, an it. I found myself really sympathising with Emma because I know it’s the truth.

Everyone else in the book was vile. The only truly likeable character was Emma’s brother, Bryan, who wanted to stick up for his sister after the town and their parents pushed her away.

Even if the plot felt laboured, or the pace was slow in some places, Asking For It is tackling sexual abuse head on, because as much as it’s fiction, things similar to what Emma experienced happen to girls every day. Whether it’s non-consentual touching, catcalling, or rape itself, teenagers encounter it so often. I want this book to spark discussion and/or education around these subject.

V  E  R  D  I  C  T
Although the ending, like Only Ever Yours, was sadly ambiguous, it reflected reality and that’s what I appreciated. Overall, this book gets 4 stars for it’s bold step towards making rape something we’re not afraid to talk about.