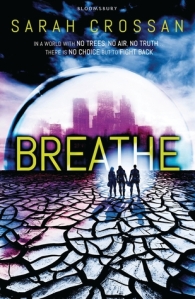 I’ll admit it here and now, this was a bit of a cover buy. After reading Under the Never Sky and eventually really liking it, I thought I would give this series a try, since it seemed pretty similar! In a world where there are no longer any trees, your oxygen is controlled by Breathe and unless you’re Privileges, you lead a very restricted life. Quinn is Privileged and Bea is not, but they’re not about to let their caste dictate their friendships, together they leave the Pod and get caught up in RATS, the rebellion that wants to expose Breathe and forge a new world where everyone has the right to breathe.

Breathe is split up into three POVs:

Bea: best friend of Quinn – she also happens to be in love with him – whose family struggles to survive. She’s rational, super smart and independent, good at keeping her emotions in check.

Quinn: son of a main guy from Breathe, under large social pressure to do well and marry a Privileged girl. He’s not as clever as Bea, but still intelligent. He’s not very good at reading other people’s emotions and seeing what’s in front of him.

Alina: rebel girl extraordinaire! Part of the resistance, working in the Pod to help those on the Outside. She gets into trouble a lot, is head strong, and compassionate.

A pretty good mix, if you ask me! They work together well as a team, even though they don’t hit it off to begin with. The secondary characters aren’t too detailed, but at least they’re necessary to the plot! What the blurb fails to mention is that this isn’t just a trio, but a quartet. Along their travels, they discover a middle-aged/old (?) woman called Maude, who rounds out the team, sort of pitting the gang against each other. Bea has a particularly strong relationship with her as does Alina. I really loved how their varying ages changed the dynamic, making it something more original. Maude was definitely a stand out character and I’m super interested in finding out what happens to her in the second book!

Parents play a big role in this story, as do relatives in general. In the second book I want to know more about the rebels, as we had a relatively short look into their lives.

Breathe has one of my absolute favourite romance types ever. The unrequited love…or is it?! Bea is desperately in love with Quinn, and he’s completely oblivious. Unfortunately it seems as though Quinn has a little thing for Alina, but she’s hung up on Abel – her friend from the resistance.

The romance was so complicated but didn’t play amasser role in the story, it affected how the characters acted in certain situations and definitely added tension to the dynamic. The best part was that none of the characters got silly over it. By that I mean, they stayed focus on the problems at hand and knew when to convince themselves to let go and move on.

I absolutely loved this element of the novel, it was so enriching and very very worth it. Considering it’s only a duology I wonder what sort of developments are going to occur in the second book, as surely a romantic happily ever after can’t happen before the conclusion.

Breathe is absolutely jam-packed with plot. We get to explore so much of the world, including Inside the Pod and Outside. I almost wish there had been a little bit more world building for Inside the Pod, as it seemed like a really enclosed space (which it’s supposed to be, of course) but still I was missing some spacial awareness. Is it the size of a town? A city? A country?  I had no idea what the population size was supposed to be.

The Outside was pretty hard to visualise, because the covers just suggest barren wasteland, but the characters hide out in quite a few buildings so I guess the surrounding structure must not have been destroyed after The Switch.

As for backstory, ‘The Switch’ was something that was referred to once or twice, which must be when oxygen suddenly wasn’t abundant, but I needed more information on how/why that happened. Maybe it was explained in a throw-away sentence, but I’m not entirely sure how the entire planet can lose all it’s trees so quickly. Was it mass deforestation, or a meteor hit? Who knows!

Although the concept and world building can be a little bit sparse, the pacing was excellent. The success was mostly due to the changing perspectives – especially effective when the team split up. I found I didn’t like one perspective more, which is always great, and the cut points weren’t full of annoying cliff-hangers, not most of the time anyway, giving the narrative a natural flow, instead of the jerky in-and-out you can often get with dual POVs.

If you have’t guessed already, I really loved this book. I can’t wait to get my hands on the second book and see how it all works out! Let’s take another moment just to appreciate the joy of the duology! Overall, I have Breathe 4 stars and would highly recommend it to those looking for the next sic-fi dystopian hit!

One thought on “Review: Breathe by Sarah Crossan”