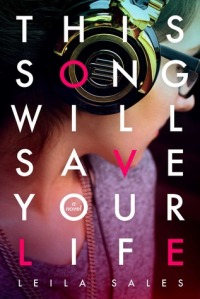 I decided I needed to read everything by Leila Sales practically as soon as I finished Tonight The Streets Are Ours. It was an instant decision, and one of the best I made in 2015. Although I didn’t like TSWSYL and much, as indicated by the star rating, it was still an amazing eye-opening read. It starts with Elise who feels like she is completely alone and doesn’t fit in so she decides the next logical step is to kill herself. Heavy, right?

Obviously Elise doesn’t kill herself otherwise this wouldn’t be a very good coming-of-age story about finding who you truly are and people who accept you for you. Sales is really good at dealing with bigger topics like imagining people to be more than they are and translating them into contexts that we can all relate to or empathise with. Elise was a difficult character to get into, although I could relate to some of her emotions, they were so intense that I had to put the book down every now and again just to take a breather.

Things seem so helpless in her life, and the first few chapters set up her family situation and the backstory of her failed suicide attempt and how this made everything even worse, if that’s even possible.

Elise is intense, but she has a loving family who support her. Even though she was quite manipulative with her parents the scenes where she was talking with her dad or with her mum’s new family really grounded this otherwise pretty crazy story. You can’t help but feel sorry for her, as well as roll your eyes at her for all the silly decisions she’s making. Because she hasn’t had that much experience with friendships or boys her naivety reminded me of Harriet Manners from Geek Girl, she has the nerdy part down but with depression as a bonus, fully abstracting her from the collection of fun and misunderstandings that Holly Smale writes. Still, Elise was incredibly realistic, for the most part she thought like a normal teenager, and I was relieved to find that this book explored characters who weren’t perfect, because being a teenager is hard! And often friendship struggles are never shown to the extreme like in this book.

I think Leila Sales has to have a nightclub feature in her stories. Start is the underground club where Elise finds her passion for DJ-ing – yes, that title really was literal! – there she meets a whole host of colourful characters that are as unexpected as they are wonderful. Elise’s half-sister was a highlight, so was Vicky from Start, in their respective exchanges you see so much character development or regression. The dialogue is seriously wonderful.

The romantic side of This Song Will Save Your Life was probably my least favourite thing EVER. As soon as Elise got herself swept away by the hurricane that was Char I stopped relating to her. It seriously got to the point where I almost DNFed this book, because I didn’t understand how nonchalant Elise was about the whole situation. The aftermath of their relationship didn’t have the same emotional effects as I was expecting, which I guess is a good thing. I just thought she would be more distant and clingy and instead she manages to stay cool and collected like nothing bothers her. Suffice to say I probably wouldn’t have felt the same way in a similar situation, but that doesn’t mean that what she felt was wrong, it’s just my personal opinion that the relationship was unbelievable.

I really loved seeing Elise find passion in a hobby, even if she was willing to sacrifice everything for it. Even if you have to suspend your disbelief A LOT to convince yourself that a 16 year old (underage girl) could actually sneak out of her parents’ house every Thursday night to DJ at an underground club for an hour without being kicked out or discovered. I think it was pretty easy to see how things were going to come together with Char – the signs were all there – but the ending had me on the edge of my seat, not knowing whether things were going to work out after Elise had to face al the consequences for her actions.

There’s also a cyber-bullying subplot that I wish had been expanded on more. I think it only wasn’t because we didn’t spend that much time in the school setting and focused more on the nightclub. However, what it did reveal was how bad schools are at sorting these things out and how vindictive people can be! The added mystery of who’s writing a suicidal blog under Elise’s name definitely could have been played up more but still added to the conclusion satisfactorily.

I really enjoyed This Song Will Save Your Life, even though it wasn’t the fluffy romance contemporary I was expecting (for that sort of thing go to Kasie West!). I would totally recommend it if you’ve enjoyed Sales’ other works or if you’re interested in a book that looks at depression and feeling alone, because there’s something to be learned from Elise’s story.