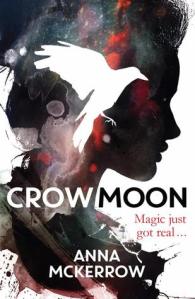 Crow Moon is a UKYA book about a Greenworld and a Redworld, that’s pretty much all I knew before reading. Also, the cover is absolutely beautiful, but completely misleading. Just like Half Bad by Sally Green, Red Witch explores a magical witch land through a male protagonist. I never really connected with the voice, maybe because I prefer female protagonists, but something was definitely hindering my enjoyment and access to the story.

Forty or so years into the future, England has been split into the Redworld and the Greenworld. The Greenworld is mostly the south west of England – Cornwall, Devon, etc – and has converted to a Pagan-esque way of life, celebrating goddesses and nature. On the other side of the fence is the Redworld, which we learn pretty much zilch about, other than it’s a dark and scary place where people and struggling to find sustainable power sources. Also, there a gangs that try to infiltrate the Greenworld to find out why everyone’s so happy over there.

Danny,  is the main character, and I have to say that after the pretty female profile silhouette on the cover, I wasn’t expecting this. Eventually I settled into his voice, but he was so motivated by teenage-boy hormones that I kept thinking he really needed to sort out his priorities. After fleeing from his home town after some unfortunate events occur he lives with him mum’s friend Loweena for a while, where he meets his love interest Saba and her mish-mash group of friends, and has to face his destiny. He was a very typically teenage boy, I suppose. So, although there were some magical-realism elements, it was very grounded in the realism side of things.

Saba is Loweena’s daughter. She’s feisty and powerful and pretty much everyone wants her or wants to be her. She’s got a free-spirit energy and is very passionate about things. She’s also cheating on her boyfriend Tom to be with Danny so her morals are…skewed. I can’t say I really liked her character either. She was being selfish, wanting to have her cake and eat it too, and if there’s anything I despise in a character it’s selfishness.

I really enjoyed the scenes where the teenagers would gather together to drink and gossip. It seemed like exactly the kind of thing 17-year old witches would sneak off to do. Yeah, you have extreme power, but do they know how to use it? No.

It’s pretty slow going until the end thee they have a battle between the coven stead and the gangs, who infiltrate their home. Throughout the book, Danny’s power means he’s linked to the bad guy, Roach, so the divide between good and evil isn’t always as clear. More generally, I think I was just expecting more. I wanted more character development, but instead I got teenage silliness and melodrama. It was a frustrating reading experience. As for the world building, I feel we know a LOT about the Greenworld and how they operate – which I have to say was super interesting and maybe even plausible – but we know very little about Redworld.

I already know that the second book Red Witch is from Melz’ – Saba’s jealous sister – POV, so I’m looking forward to it, because Melz was underdeveloped even though she had a lot of emotional potential. However, I need to know what happens next for Danny and Saba, after a full book with them I think I’ll be a bit annoyed if we don’t hear from them at all in the second book. There’s just been a war for goodness sake! That can’t be the end of their story! Overall, I gave Crow Moon 2.5 stars, with high hopes for the second book.

One thought on “Review: Crow Moon by Anna McKerrow”