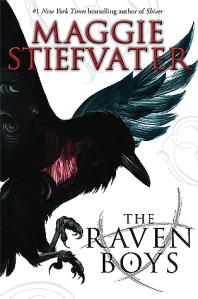 The Raven Boys is one of those seriously popular books that I still haven’t read. Maddie has read the first three books and now with the recent(ish) release of the season finale, I feel a lot of people are talking about it again. So, I decided to pick it up, mainly because the idea of psychics really drew me in as I’m writing a sort of magical-realism witch story at the moment. As I was reading I kept thinking ‘Oh gosh I’ve got another three of these to go.’ Then, I realised I could just abandon the series even if I couldn’t DNF the book. I mean, everyone told me that nothing really happens but I wasn’t entirely sure to what extent nothing happens. And let me to you: Nothing Happens. (apart from right at the very end when it’s like whaaaat? I’ve skim read too much by now, how did we get here? I’ll have to fill in the blanks myself.)

There are four boys: Gansey, Ronan, Adam, and Noah. They are the raven boys because their posh private school has a raven crest. Gainsay in particularly is obsessed with ley lines and trying to reawaken this Welsh King with untold power…for some reason. Blue lives with a lot of clairvoyants, her mother is one, but she is not. Everyone has told her all her life that if she falls in love, her true love will die from her kiss. Enter all these raven boys who are oh so alluring and you’ve got yourself a group of boys who are intrigued by one girl and one girl only. And somehow she’s going to help them find this king before someone else yadda yadda. It’s actually pretty hard to pin point what’s going on half the time.

I didn’t like ANY of the boys. Let’s start with that.

Gansey was overly privileged and didn’t really think through what he said to others. He didn’t really care about money and was a bit of a dick at times. Ronan could be considered a brute, he was moody and mysterious and bad at school even though he’s fluent in Latin??? Adam was pushed around a lot by his family, and was the scaredy sensitive one. Noah had no real personality and was definitely the weakest, I forgot he was there half the time and I think so did Stiefvater.

Then there was Whelk, another male character *eye role*, who was the boy’s teacher and he had his own sort of storyline, which I wasn’t interested in in the slightest.

Finally there’s Blue, the main female and I felt like I didn’t even get to know her properly. Apart from the fact she likes to wear crocheted things and dislikes it when people tell her what to do. Even though Blue had a lot of female family, I felt like this book was overrun with male presence. Too much testosterone for me! The aunties played an interesting role, but it was like they were only there to add to Blue’s eccentricity not to add anything to the plot.

I’ve already said nothing much happened, so you can already guess I found this book to be incredibly slow. There weren’t enough details/explanations as to why the boys were obsessed with the ley lines other than that they just were. (Maybe there was more and I just missed it as I tried to skim to something more exciting?) Speaking of skipping, I skipped pretty much everything related to cars. I know Maggie Stiefvater has a thing for cars herself, but I found the in-depth description a bit boring and when I was supposed to infer something about a character based on what car they were driving I was pretty much clueless.

Also, obviously nothing happened with the whole kiss thing because this is a four book series. The ending felt like a whirlwind but at least I eventually made sense of it…I think.

I’m only continuing because of the final line. I was mostly confused but kind of intrigued, and I figured maybe after some more pages I’ll finally connect to one of these characters.

2 thoughts on “Review: The Raven Boys by Maggie Steifvater”