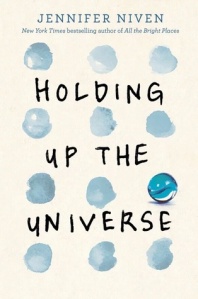 Holding Up The Universe by Jennifer Niven
Genre: Contemporary
Published by: Knopf Books for Young Readers
Pages: 400
Format: ARC e-book
Rating: ★★★★
More: All The Bright Places
Note: We received this book from the publisher in exchange for an honest review.

Holding Up The Universe was definitely a book I was tentative to read. After really not liking All The Bright Places and seeing the kind of horrific first blurb this book had on Goodreads, it felt like a bad choice of reading material. BUT, second chances are always deserved and Netgalley did a much better job of summarising the plot without any negative connotations. So, let’s talk about it!

Holding Up The Universe is about Libby, a girl who used to be the fattest girl in America and had to be lifted out of a burning building by a crane. It’s about her going to public school for the first time since her mother died and dealing with all the repercussions of being surrounded by idiot high schoolers.

It’s about Jack, too, who suffers from a mental illness where he can’t remember faces. One day, after being goaded by his jerky friends, he decides to literally jump on Libby’s back and ride her like a bull. Horrible right? But, this incident forms an unlikely friendship and digs up a connection between the two of them that’s deeper than a high school bullying.

It definitely follows the same pattern as All The Bright Places, for sure, though was a little far fetched. What Jack suffers from is extremely rare but I’m just glad it didn’t descend into the plot of Shallow Hal, like a fat girl can only be pretty if you don’t know she’s fat. And here lies the controversy around the book: the perception of weight.

What was so disgusting about the first blurb, and the first twenty or so pages of the book was that it portrayed Libby as unloveable. Like, just because she was overweight, it was impossible to imagine her as sexy or desirable, which is 100% untrue. Libby was such a great character because her weight didn’t matter. It didn’t change her confidence or attitude, if anything it made her more confident, and that’s exactly the kind of body positivity we need to be seeing in YA. Phrases like ‘no one will ever want to have sex with me’ or things like that are ridiculous and harmful, because it’s suggesting girls are only valued for their bodies when that’s the least important thing. It’s hard for me to write about because I just get so angry at it, but Libby was great (after the first twenty pages) because her weight was a non-issue.

And, it was a non-issue for Jack too. I mean, why would it even be an issue in the first place? I liked that he liked Libby for her personality and her body. Apart from the whole bull riding thing, he really stuck up for Libby and made her feel loved for everything she had to offer. What could have been a relationship just as toxic as Violet and Finch’s in All The Bright Places ended up portraying exactly what that couple was lacking: actual love.

Overall, I’d recommend this book to anyone that loves it when mental health pops up in YA. The tone is different, the relationship is unique and it’s a great reading experience that makes you really question how society has warped our opinions on what’s considered beautiful. But most importantly, it shows that everyone deserves to love and be loved and that’s always something I’ll stand behind. 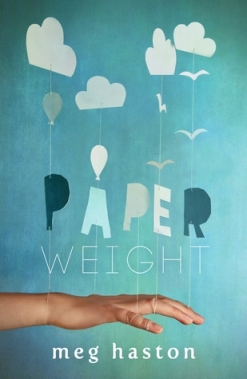 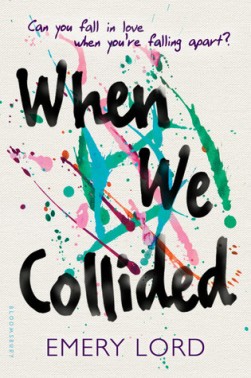 3 thoughts on “Review: Holding Up The Universe by Jennifer Niven”