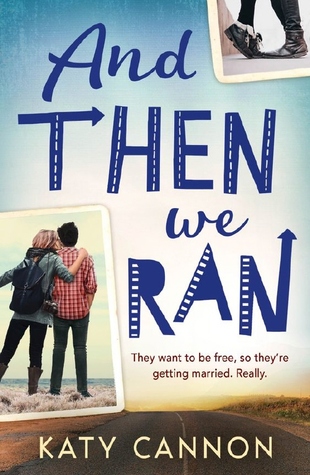 Maddie really loved Katy Cannon’s previous two books (Love, Lies, and Lemon Pies and Secrets, Schemes, and Sewing Machines) so obviously we were ecstatic to get our hands on her most recently release. We were also lucky enough to get to attend Stipes’ ‘Show YA Stipes’ showcase, and Katy was there talking about And Then We Ran, making it sound so exciting and different. It’s also not often that you read a British road-trip novel, and while it wasn’t from one coast to another, it was full of fun characters and crazy adventures.

Megan’s sister has recently died and her parents are all about pushing Megan to fill her shoes. That means going to university to study either medicine or law and be on her best behaviour 100% of the time. Obviously, this doesn’t go down well, and Megan is feeling seriously restricted, but luckily…there’s a get-out clause. It’s her dream to start a photography company and make a name for herself by moving to London and getting started right away, and in her grandmother’s will, Megan has been given sole ownership of a flat in London either when she is married or reaches the age of 21, whichever comes first. Megan gets this crazy idea to get married, but the only problem is she’d need her parents’ permission, and there is no way she’s going to get that. BUT she’s read about a place where you can get married young without parents’ permission, so there’s only one thing missing: the groom.

While I’m not a fan of demonising parents, I thought And Then We Ran did a spectacular job of explaining its own logic and putting everything into perspective. This is a pretty spectacular plot, so Cannon had her work cut out for her to make it 1) plausible and 2) convincing. I though both were achieved excellently!

There’s a danger with road-trip novels that things are going to get a bit too episodic, but that really wasn’t the case. To make a successful road-trip story you need to have threads that run through the entire book and impact the decisions the characters make. I was completely not expecting the dimension of guilt Megan felt about her sister. It gave And Then We Ran a really emotional core, but not so that it was too heavy and meant Megan couldn’t pursue her own personality and interests.

The balance between family troubles, financial troubles and the romance is also spot-on. While I was far more interested in Megan, adding two POVs to this story also made things run smoothly. The moves between Elliott and Megan were seamless and I thought both were equally complex characters. (Obviously, Elliot needs some drive too so that he’s equally invested in this whole marriage thing!)

Also, I loved how much emphasis there was on university and making sure you’re picking the right course for you. I’m beginning to notice a shift from secondary school to pre-university focused stories in UKYA now and it’s giving me LIFE. I honestly wish I had this book before I was going to uni, because it just proves that you have to follow your dream and be authentically you, but this book also shows how important it is listen to your parents and the people that care about you generally. I think And Then We Ran‘s main focus is on having a support system – and that doesn’t have to be parents, it can be friends or teachers, whatever! – so long as people are there for you to help make decisions that could change your life forever.

Generally, I was worried that this book would paint teenagers as reckless, impulsive and irresponsible, but after finishing it that is definitely NOT the case. It shows teen thought processes in their best and worst lights, and both are necessary!

As you can yell, I really liked the messages in this book! I wasn’t too fussed about the romance, but I really appreciated the craft! And Then We Ran is full of life-like characters and real-life lessons, and I would seriously recommend it!

One thought on “Review: And Then We Ran by Katy Cannon”