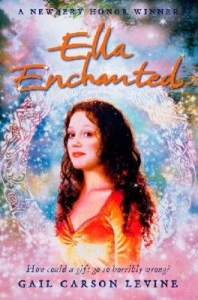 Published in 1997 (the year of my birth!!) Ella Enchanted was difficult to track down. Unlike GCL’s other books, there wasn’t a Kindle edition. Any new version of the book was kind of expensive. So, I did the next best thing: used and new, and let me tell you, that is a hidden source of excellence.

END_OF_DOCUMENT_TOKEN_TO_BE_REPLACED 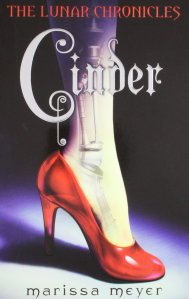 I have recently become very interested in fairy tale retellings, and knew that there was a lot of hype surrounding the ‘Lunar Chronicles’ series by Marissa Meyer, containing four books: Cinder, Scarlet, Cress and Winter.

‘Cinder’, the first book in the series, is a retelling of Cinderella, who is my second favourite princess (the first being Jasmine from Aladdin) so I was super excited to dive into this book. I’ve never really read any science fiction before, but was intrigued by the cyborg/android element of the novel, which was a really good addition to the original tale.

One of the reviews in the front of the novel described ‘Cinder’ as a “fractured fairy tale”, which I think is the perfect way to describe it. There is no doubt that the content of the story is grounded within the fairy tale and your favourite parts can be found within this book, such as, the missing shoe (or foot in this case), the handsome prince, the wicked stepmother (politically correct term being ‘legal guardian’.)

Cinder, because of it’s sci-fi basis, is wonderfully fast paced. One of the story arcs is that there is this plague that is affecting the whole world and Cinder provides key scientific information about an antidote. This illness helped to add tension and fear to the novel, as Cinder’s sister, Peony, is claimed by the pestilence.

Both the reader and Cinder know little about where Cinder came from. It’s excellent to see her past unfold and her struggle with being a cyborg, a second class citizen that is bound to be looked down upon by the rest of society. There is quite a big twist in the story at the end, though the reader feels prepared for this, as they are fed little tidbits of information.

There are some extraterrestrials in the story, which want to wage war on Earth. (Seriously, there is so much going on, I can’t wait to read the next books in the series to see how it all pans out!) These aliens, called Lunars because they inhabit the moon, have brainwashing powers which can only lead to disaster.

All characters are wonderful. My favourites include Cinder (obviously because what’s not to love about that kick-ass girl?), her android friend Iko, who adds some light relief and the prince, Kai, who Cinder meets within the first chapter making for some great romantic tension all the way through the book.

It’s told in third person perspective, so a lot of the time the reader is with Cinder (the best place to be, she’s got a lot to do) but is sometimes in the presence of the prince, who has to diplomatically deal with the Lunars and their demands. Tough stuff.

My favourite part of the whole thing was probably the ball scene at the end of the novel. So much drama! So much excitement! What’s even better, there was no fairy godmother. Cinder went to the ball like a raggedy doll, with a foot that was too small for her and a dress coated in grease stains. Perfect. I loved how Cinder didn’t have to be beautiful like a princess and wasn’t treated like one. Don’t get me wrong, I love Cinderella, but it felt like Cinder was more deserving of a happy ending than she was.

What’s worse was that Cinder was left on a cliffhanger. The book ended in a ‘Darth Vader is Luke’s father’ kind of way before leaving Cinder imprisoned in the palace with a small hope of escape. I’m so glad that we’ll get to read more about Cinder and her *hopefully* happily ever after more in ‘Scarlet’. Speaking of which, Winter, Cress and a small mention of Scarlet was made within Cinder, leading to a few excited squeals from myself and Bee (we were reading this wonderful book together.) These small mentions will go a long way to ensure that the whole series flows together nicely from start to finish.

Overall, I’d give this beautiful book five out of five stars, no question. It’s definitely made my favourites list and probably top 14 books of 2014 as well. I’d recommend this book to anyone who has read any Jackson Pierce books or just like fairy tales in general. They sure make for excellent reading!