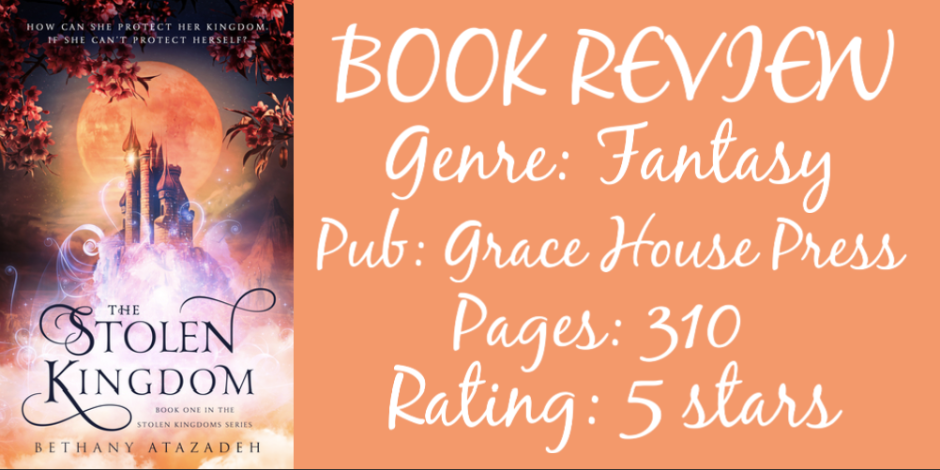 An exciting, tightly-plotted adventure with powerful characters, ‘The Stolen Kingdom’ really captured me. What I loved about this retelling was everything new Bethany Atazadeh brought to the classic Aladdin story – the magic, the female empowerment and combining it with a larger fairy-tale world.

The main character, Arie, really stood out to me. She’s a princess that cares about ruling her kingdom one day, without being afraid to get her hands dirty and do things for herself. Her determination was so strong, even in the face of manipulation, capture and almost drowning(!)…it all came through in her voice.

Her love interest, Kadin, had a equally powerful presence, and the switching between their perspectives always came at just the right point! I absolutely loved how Arie’s power to read minds affected their relationship and how they saw each other. It was such a clever way to get to know Kadin immediately, and shows an attention to character as well as plot that not all fantasies manage! I was pulling for their romance the entire time, and really anticipate what’ll go down between their as the series continues (if I could find a Jin myself, I’d wish for a happily ever after, of course!)

The pacing was excellent – everything that happened perfectly building on what came before. The scenes with the crew of thieves in the palace, and Arie showing off her powers were my favourite, you honestly won’t be able to put the book down when things come to a head with Amir. And those final chapters….wow. Talk about character development!

I read the book in one sitting, and I can’t wait to read the rest of the books in the series! Imagining how this world will expand and how the characters’ journeys will continue is so exciting. Seeds have been planted for ‘The Jinni Key’ that have me wondering if it’s even possible to wait until its December release.

We’re looking at the next ‘Lunar Chronicles’, for sure!

It’s no secret that fairy tale retellings are my favourite genre, and The Lunar Chronicles is my favourite series of all time. Marissa Meyer was a goddess when it came to weaving so many well-loved fairy tales together in this sci-fi universe and I couldn’t have loved it more. So, Heartless, obviously, made my list of most anticipated releases of 2016. I was so excited to see her tackle another fairy story, even if Wonderland and I don’t really get along. Marissa Meyer had also proved that she knows how to write a prequel, before-the-villain story with Fairest, so my expectations were high, and I was satisfied…eventually.  END_OF_DOCUMENT_TOKEN_TO_BE_REPLACED

From the very beginning, I was confused about what Stealing Snow was trying to retell. Her name, Snow, made me think of Snow White. But, the whole mirror thing and wintry landscape had me thinking Snow Queen. Either way, I was disappointed. Let’s talk about why… END_OF_DOCUMENT_TOKEN_TO_BE_REPLACED

Let’s go through, one by one, my thoughts on all the stories collected in the Lunar Chronicles anthology, Stars Above. Spoilers: Marissa Meyer saves the best until last!

THE KEEPER – ★★★
This is a story of Michelle Benoit, when she’s given Cinder as a charge. We also get little hints of preteen Scarlet and it is the sweetest thing. I loved knowing more about her character, and what made her so important to Scarlet and the series as a whole. A worthy edition to the storyline!

GLITCHES – ★★★★
Cinder’s origin story, it does a really great job of showing Peony’s passion for her new sister, and Adri’s disgust. This is also satisfying. It deals with the root of Adri’s dislike and starts to show how Cinder is in such a subservient place at the beginning of her book. Glorious.

THE QUEEN’S ARMY – ★★
Wolf has a name??? This was also great. I’d read Glitches and this one prior to the anthology coming out, so I knew what to expect. Getting backstory to the Lunar army, and what caused such a rift between Wolf and his brother was important to understanding their actions in Scarlet. It fleshed out my knowledge of the army, and the lengths Levana was willing to go to ensure her ultimate power. It was really short, though, so probably could have been added as a backstory chapter in Scarlet itself.

CARSWELL’S GUIDE TO BEING LUCKY – ★
This was one of the weaker stories. Essentially, what we have here, is a tale of high school Carswell Thorne, being all flirty with girls who aren’t Cress. Of course, he didn’t know her at this point but it disturbed me to think of him with anyone else but my precious darling. We get a bit more information about his motives for wanting the Rampion ship and being a captain, but it’s a story I could have lived without.

WHEN SUNSHINE PASSES BY – ★
Again, I thought this one was weak. It’s the tale of Cress being taken to her satellite by Sybil. Nothing we didn’t already know, so it felt like a bit of a filler story. It’s a shame that the stories of my two favourite characters were the weakest, but Cress was my favourite of the main four books, so, I have that to be thankful for. Cress and Carswell are just the best when they’re together, and these two stories prove that.

THE LITTLE ANDROID – ★★★
This was the story that was most disassociated from the main gang, so if you’re interested in reading a The Little Mermaid retelling, in a sci-fi setting this is for you. Cinder makes a little cameo, but all together, it was a nice retelling of the Hans Christian Anderson version that worked extremely well. No voice box in the android to reason with the lack of voice? Excellent.

THE PRINCESS AND THE GUARD – ★★★★★
Now, apart from the final story, this was the one I was MOST interested in. It gave backstory for Winter, why she doesn’t use her magic power and how she got those three scars on her face (that do nothing to mar her beauty!) This is probably the story that’s most worthy of reading because I think it was one of the most excellent explanation of things we already found out throughout the series. Getting to see more of Jacin and Winter’s relationship is always a plus, and we knew from Fairest that they were close basically from birth. Such a lovely couple. What a great short story.

THE MECHANIC – ★★
Knowing what Kai was thinking when he first met Cinder was a dream of mine, and I’m glad it’s realised in this tale. It’s extremely short, but so is there first meeting, so…It was just lovely to see the little seeds of their relationship develop, and that Kai was interesting in her from the very beginning.

SOMETHING OLD, SOMETHING NEW – ★★★★★
And here’s what I was waiting for. A WEDDING. OH MY GOODNESS. I was expecting it to be Winter and Jacin, immediately assuming it was a royal wedding, but I want all my babies to get married one day, so I wasn’t disappointed with any kind of union. And it was BEYOND cute. All the gang, in one place, my dreams literally came true. Marissa Meyer explained this short story as like fan fiction with her own characters, and I definitely got that vibe. Everyone deserves a happy ending, even if it’s two years after the end of Winter, and finally Cinder and her Prince are together forever after!

I finally got to finish the Retellings series! I read Sisters Red, Sweetly and Fathomless so long ago, I was wondering if Cold Spell would make sense to me! Especially because the Snow Queen fairy tale is one I’m not familiar with, but it’s safe to say, Jackson Pierce made the story her own and it was extremely enjoyable!  END_OF_DOCUMENT_TOKEN_TO_BE_REPLACED 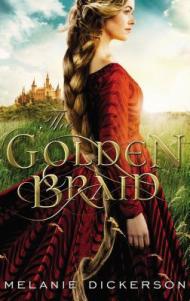 I received this book from the publisher in exchange for an honest review.

I was immediately drawn to The Golden Braid because of its genre. Fairy tale retellings are some of my favourite things, and Rapunzel has such a great story to adapt. As this was set in 15th century Germany, rather than a contemporary or futuristic setting, it reminded me a lot of Shannon Hale’s The Goose Girl. I really like seeing fairy tales in their natural habitat, and I think understanding the context of the time really helped make this retelling special.  END_OF_DOCUMENT_TOKEN_TO_BE_REPLACED 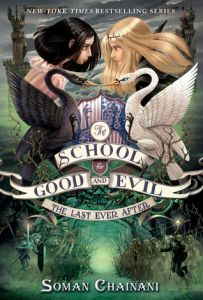 The Last Ever After by Soman Chainani
Genre: Fairy Tale, Retelling, Fantasy, The Best Thing Ever After
Published by: HarperCollins, the little geniuses.
Pages: 672, and worth every word.
Format: Well loved Paperback
Rating: Infinity
Where to Find: Goodreads | Author | Amazon

The time has come! My perfect fairy tale is over, sobsob. What am I going to do without anymore books in this series? How am I going to cope? (I’ll wait for The School For Good and Evil movie, that’s what. (Can Agatha be played by a British 18 year old, would that be OK?)) Warning: this isn’t really a review, more like a fangirl gush of my feelings for this book and the series in general. Just imagine rainbows and glitter embellish this review, and you’ve pretty much understood my feelings. I LOVE this. Like, really really really LOVE it. Soman Chainini can do no wrong. With that said, on with the review!  END_OF_DOCUMENT_TOKEN_TO_BE_REPLACED

I’ve been reading a lot of Shannon Hale lately, and a lot of fairy tale retellings, so this was a great book to pick up, as a combination of the two. I thought it would be an original story, rather than a retelling, but it turns out this is a retelling of ‘Maid Maleen’, a relatively unknown story by the Brothers Grimm. I’d never heard of it before, so similar to ‘Goose Girl’ I had no idea what to expect. The tower on the cover made me think of Rapunzel, but that is only half the story. END_OF_DOCUMENT_TOKEN_TO_BE_REPLACED

I read this book as part of a readalong with Casey over at ABasketCaseyReads on YouTube – we both really love the fairy tale retelling genre, so this was the perfect pick, and by happy coincidence, also a perfect book!  END_OF_DOCUMENT_TOKEN_TO_BE_REPLACED

Published in 1997 (the year of my birth!!) Ella Enchanted was difficult to track down. Unlike GCL’s other books, there wasn’t a Kindle edition. Any new version of the book was kind of expensive. So, I did the next best thing: used and new, and let me tell you, that is a hidden source of excellence.