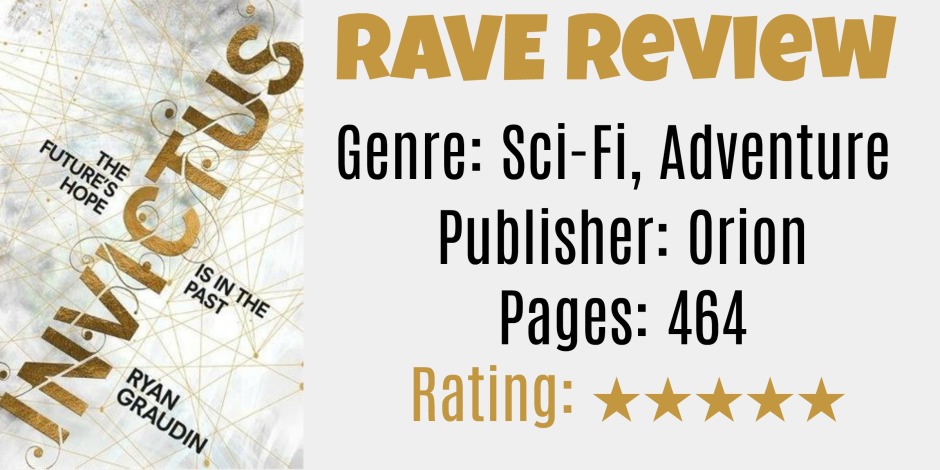 *Note: We received this book from the publisher in exchange for an honest review.

Because we’re just going to be shouting about how incredible this book was from now until the end of time, we thought instead of writing a review that would be 100% incoherent, we’d shuffle our thoughts into a Reasons To Read Invictus. So, without further ado, let’s get into it!

Also, thought we’d give a shoutout to our friends Carys, Kate and Lily who we buddy read this book with. It was super fun to discuss it with them, so maybe another pro of this book is that it’s great for a book club pick – there’s a lot of talk about!

So, obviously, Invictus is getting 5 stars from us! I so wish this was the first in a larger series, but it’s also such a rewarding standalone (and you don’t get many sic-fi ones!) that it’s perfect on it’s own! We hope you enjoy it as much as we did!

So, what I didn’t realise was that Blood For Blood is the last in this series. It was only a DUOLOGY! I was a little suspicious when it felt like things were wrapping up and I was like ‘wait!’ While I am extremely excited that it meant I could unexpectedly finish another series before the end of the year, I’m really sad that I won’t be off with Yael on another action-packed adventure!

END_OF_DOCUMENT_TOKEN_TO_BE_REPLACED

I was super excited to get my hands on The Walled City considering Wolf by Wolf was one of my absolute favourites of the year. However, this book has showed me that just because you gelled with an author on one of their books, doesn’t guarantee that you’re going to like them all. I put my distaste of this book mostly down to the subject matters – it’s not exactly what I would describe as enjoyable.

END_OF_DOCUMENT_TOKEN_TO_BE_REPLACED

I received a copy of this book from the publishers in exchange for an honest review.

WOW. Like, seriously. Wow. Wolf By Wolf has to be one of the best books I read in January. I was hooked from the very beginning, and I have a feeling that Yael will quickly become one of my favourite heroines. Luckily for me, this is going to be a trilogy – even though I do have some concerns about where this could go – so we’ll be seeing more of Yael soon! If you haven’t heard of this book, it’s about Yael who is a skin-shifter, after being experimented on in a concentration-camp-like environment, and as part of the rebellion against the Nazi regime, she is going to adopt Adele Wolf motocross champion’s identity and try to win the race from Germany to Japan, because it will give her the perfect opportunity to kill Hitler. If you don’t think that sounds like a crazy wild time, definitely worth a read, then I don’t know does!